SINGAPORE - When he first started teaching at a pre-school, even the parents of the children enrolled there were curious as to why a man would take up the job.

"Some of them would ask me 'Men can join this job?' or 'Why didn't you teach primary school instead?'" said Mr Mohammad Aizat Hashim, 31, who is now a principal, at Mosaic Kindergarten.

But he knew early childhood education was his calling, after a particularly memorable experience with a group of pre-schoolers when he tried out the job as a fresh graduate.

Back then, it was his first time reading to a group of 20 pre-schoolers, with their undivided attention on him.

Mr Aizat felt intimidated and nervous, as he had never stood before so many children on his own before. He took a deep breath, flipped the page and began reading a story - and the children's gazes never left him.

"That was the moment I knew this was the job I want," said Mr Aizat.

"They all had eyes on me and were all ears, looking genuinely interested in whatever I was reading."

In August, he enrolled in a part-time Master of Education (Early Childhood) course at the National Institute of Education. 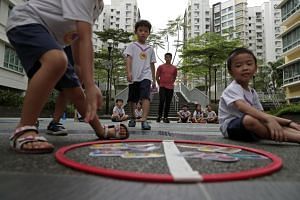 Being teacher Shane: One of the very few male early childhood educators here talks about his career choice

"I feel that in this industry, we need to raise the level of professionalism among early childhood educators. One way to do that is to do it myself, to set an example for those within my pre-school," said Mr Aizat.

"If leaders propagate the importance of upgrading ourselves, the general knowledge level of the early childhood education sector will increase," he added.

Mr Aizat was one of three scholarship recipients at the ECDA Scholarships and Training Awards Presentation Ceremony 2019, held at Suntec Singapore Convention & Exhibition Centre. The Training Awards were given to more than 400 students this year, who want to pursue a career in the early childhood sector.

Addressing more than 400 aspiring and in-service early childhood educators in the audience, Minister for Social and Family Development Desmond Lee said: "While the Government can do more to increase accessibility and affordability, we need your help to provide quality pre-schools for our children.

"At its core, quality is about having good educators. You are our children's first teachers and their parents' trusted partners."

Mr Aizat, a mechanical engineering graduate, faced several challenges when he first joined the sector, in particular due to his being male in a female-dominated industry. His first job was at a pre-school in Sembawang.

"There was a memo sent to parents that there would be a male teacher joining the team, and the centre had also never had a male pre-school teacher before,"said Mr Aizat. "I was wondering if that was the common practice."

As a male early childhood educator, there are certain restrictions, said Mr Aizat. "We generally avoid routines like showering, so for male teachers we are in charge of mealtimes or story time while another teacher is busy showering the children.

"That's how we accommodate each other, and I am blessed to have worked with partners and principals who are understanding."