These days, parents not only have to contend with steep pre-school fees, but they also have to budget for the extra costs that come with giving their tots the "full educational experience".

On average, parents are forking out a few hundred dollars a year - sometimes up to a thousand - for anything from concert costumes, to field trips and graduation photos.

Excursions, for instance, are held around four times a year, costing about $15 to $50 per trip depending on transport charges, entry fees and whether lunch is provided. These can be to places like Sentosa or the zoo.

Meanwhile, costumes for concerts can cost from $30 to close to $100. While these are considered "optional", many parents say they would still pay for them, for fear that their children will "miss out".

Madam Grace Tan, for example, already spends $6,000 a year to send her twin boys to a kindergarten in Sengkang. She is forking out an extra $1,200 a year for her five-year-olds to attend field trips, school concert costumes and books for a reading programme.

The 36-year-old, who is self-employed, said these extra expenses can be quite costly when added up.

Marketing manager Yvonne Chan, 44, who has three girls aged between one and seven, sends her second child, six, to a kindergarten which costs about $2,400 a year.

'NO' MEANS BEING LEFT BEHIND

Some of the field trips are not necessary, but if I don't send my boy for them, he would be left behind at the centre.

MR WILLIAM LIM, who has a five-year-old son.

It is important to explain to my children that they cannot always have everything that their peers have.

She is paying over $250 in extra expenses for her daughter's graduation concert costume, compulsory field trips and yearly class photos, among other things.

"If my child is eager to attend, it would be a great disappointment (to her) if we opted out," she said.

Mr William Lim, 39, who has a five-year-old son, added: "Some of the field trips are not necessary, but if I don't send my boy for them, he would be left behind at the centre."

Some parents questioned the need for certain expenses.

One parent, who declined to be named, paid about $80 for her daughter's graduation concert costume. "If we didn't get the costume, she wouldn't be able to participate," she said. "Now, the costume is chucked aside in her cupboard."

Pre-schools, however, defended the cost of such activities.

Dr T. Chandroo, chief executive of pre-school chain Modern Montessori International, said most centres organise graduation events for the kids to express what they have learnt at the end of their pre-school years, while field trips give kids hands-on experience of topics discussed in class.

Enfant Educare said it does not make a profit from peripheral charges.

While some pre-schools offer financial help for activities when necessary, others say they try to save costs through various means.

For instance, major pre-school operator EtonHouse reuses materials or clothes, or creates its own props.

The Early Childhood Development Agency (ECDA) said that to ensure transparency, childcare centres should include payable fees when informing parents of programmes to help them make informed decisions.

Pre-schools with plenty of frills at double the fees 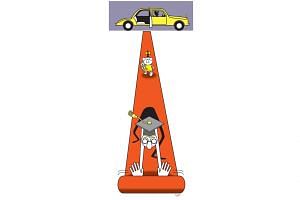 "In addition, centres are required to provide parents with an 'opt-out' option for non-core programme activities," it added.

Observers say parents should assess the value of each activity or item before paying for them. But they noted that children may feel left behind if they see their peers having something they cannot have.

But Jalan Besar GRC MP Denise Phua, who heads the Government Parliamentary Committee for Education, advised parents not to feel "pressured to keep up with the Joneses". She said: "Learning to stick to the basic essentials and living within one's means are good values to impart from young."

Madam Ngeoh Siew Chin, 38, who has two daughters aged three and seven, has said "no" to her younger daughter joining an excursion to the River Safari as the family had already been there twice that year.

The manager said: "It is important to explain to my children that they cannot always have everything that their peers have."