To win a place on the increasingly popular computer science degree course at the National University of Singapore (NUS), students need at least two As for their A levels. Next year though, students eyeing a computing degree can be admitted through another route.

They can take up a five-month-long computer programming course at NUS and if they do well, gain fast-track admission into the degree course, even though they may fall short of the required grades.

NUS provost Tan Eng Chye, who was yesterday named the president-designate for the university, said it is looking at admitting more students by assessing their aptitude for a field of study.

Currently, only about 12 per cent of the 7,000 freshmen - in courses such as medicine, law and architecture - are assessed on their aptitude for a course, through interviews, portfolios and entrance tests.

The majority of them are admitted based on their A-level, International Baccalaureate or polytechnic diploma exam results.

Professor Tan, who has served for 10 years as NUS' provost, is known for introducing bold changes over the years, including allowing students to write off their grades for up to eight modules in the first year.

The aim is to reduce academic stress and encourage students to explore subjects outside their specialisation, including areas they are less confident in. The scheme has proven to be a hit with its first-year students, with more than 80 per cent taking up the option to drop their grade for atleast one module. 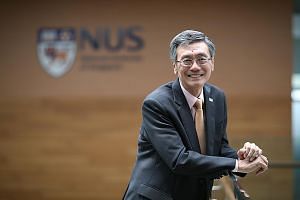 NUS provost to be its next president

Students eyeing a computing degree can take up a five-month-long computer programming course at NUS and if they do well, gain fast-track admission into the degree course, even though they may fall short of the required grades.

Prof Tan said yesterday that NUS is also looking at allowing flexibility for students to take a gap year, or even two, during their four years of study.

He said: "A student may want to break up the undergraduate degree into two parts - he or she may study for two years, perhaps go out to work for two years and come back after that to complete the degree. We are looking at how we can allow this flexibility."

As part of efforts to promote lifelong learning, Prof Tan also announced that the university will be opening up 5,000 places per year for the next five years to NUS alumni and all Singaporeans to take up courses at NUS. This is an expansion of the plan announced in May that 140 courses across eight schools and faculties would be opened to NUS alumni over the next three years. NUS alumni can take up to two courses for free.

Those courses have been "heavily oversubscribed", revealed Prof Tan, who said that there were more than 8,000 applicants for the 770 places which were made available in areas such as literature, financial risk management, human-computer interaction and stem-cell biology.

He said: "We want to go beyond NUS alumni to make these courses available to the whole of Singapore. Giving access to its education is one of the key roles of a national university."

He stressed that with global and technological advancements, higher education is set to change.

"Five, 10 years from now, learning will be very different," he said, adding that NUS hopes to be at the forefront of this learning revolution.