It will add 4,000 spots across its pre-school brands by 2021, including early years centres

The early childhood anchor operator - the second largest in Singapore - announced this yesterday at the official opening of MFS' first and largest early-years centre.

The centre in Punggol Drive, which opened in May last year, can take in up to 1,065 children and infants. It currently has more than 600 children aged from two months to four years.

Early-years centres were first announced in 2017 and are part of the Government's efforts to raise the quality of pre-school standards during children's early years and to meet the growing demand for full-day childcare places.

Eligible Singaporean and permanent resident Nursery 2 children in these centres will be guaranteed a place in a nearby Ministry of Education (MOE) kindergarten.

In a recent Straits Times report, the Early Childhood Development Agency said the number of children on the waiting list for childcare centres has almost halved in just two years - from 13,800 in 2017 to about 8,000 now. A third of them are already in a centre, but their parents hope to get them transferred to another. 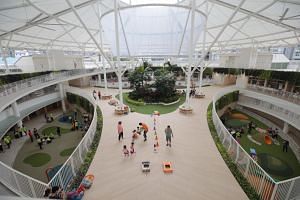 NTUC secretary-general Ng Chee Meng, who attended the centre's opening, said: "MFS wants to provide Singapore's families with accessible, affordable, high-quality childcare to ensure that our children have a good start in life.

Referencing his time as Education Minister (Schools) from 2015 to last year, Mr Ng added: "In my first speech in Parliament, I remember clearly stating that... I cannot guarantee that each child's journey in the education system will have the same outcome. That is not possible.

"But I said that I would do my best to provide as level a playing field (as possible) for all our kids, regardless of social status, income levels, race or religion."

There is more to be done, Mr Ng said, but "this is a very good start".

Parents whose children are in the Punggol early-years centre have a choice of three MOE kindergartens that their children can attend when they turn five.

The centre is MFS' largest childcare centre, spanning three storeys with a usable floor area of 8,785 sq m. Outdoor facilities include four rock-climbing mounds for young children to try out bouldering on a smaller scale, and a playground with a designated cycling track, complete with a zebra crossing to teach the children about traffic safety.

The centre also has an in-house commercial kitchen that is able to cater to large numbers.

MFS general manager Thian Ai Ling said it is important for the children to receive good nutrition, and that food safety is a priority.

"A practice that will kick in soon is to keep small samples of food," said Ms Thian.

In the event of a food poisoning outbreak, for instance, the food samples will help the authorities to trace the source and cause.

A second MFS early-years centre opened in Punggol East in June last year. It now has 180 children and infants.

A third such centre, which can take in about 170 young children, is slated to open next month in Punggol Bayview.

PCF Sparkletots, Singapore's largest pre-school operator, has also previously announced that it will have 38 early-years centres up and running by 2021.

It currently operates 12 such centres, which are mainly located in new towns like Sengkang and Punggol. Another two centres will open in Toa Payoh by the end of this year.

A version of this article appeared in the print edition of The Straits Times on May 24, 2019, with the headline 'NTUC First Campus to ramp up enrolment'. Subscribe
Topics:
More
Whatsapp Linkedin FB Messenger Telegram Reddit WeChat Pinterest Print Purchase Article Copy permalink