Underwriter Winston Loh, 39, was so eager to enrol his daughter in Tots and Teddies, he did not mind paying monthly fees from April though she started at the infant-care centre only in June.

He forked out nearly $4,000 more - the monthly fee is about $1,900 after subsidies - just to hold down a place for his daughter. "The fees are almost double or triple the price that I might pay in the heartland, but this place has better care facilities than other centres that I've come across," he said.

Mr Loh had visited four other infant-care centres after his daughter was born in January, but was most impressed by Tots and Teddies.

The centre is designed by President's Design Award recipient Lekker Architects and comes with an indoor playground and cosy reading nooks.

Mr Loh and his wife, who is the head of treasury at a petrochemical company, were looking for a place that can care for their daughter after his wife returns to work.

He said he places a lot of emphasis on cleanliness, hygiene and the quality of food when it comes to infant care, and did not mind paying extra for a place in Tots and Teddies. Not only is the centre fitted with air filters and purifiers, but it also uses organic soaps and shampoos. Given these features and the centre's smaller enrolment of fewer than 50 children, he believes his daughter is better protected against viruses.

"I'd rather pay a little more to get that convenience and peace of mind," he said. 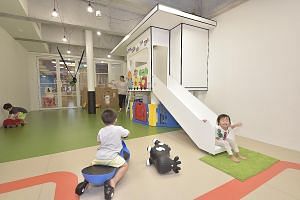 Pre-schools with plenty of frills at double the fees

Unlike other centres, which allow parents to drop in only at designated periods, Tots and Teddies has an open-door policy where they can spend time with their children at the centre any time.

Mr Loh, who wants his daughter to continue nursery and kindergarten classes at the centre, appreciates this, as his office in Market Street is right opposite the centre and he can visit her a few times a week.

Risk analyst Ting See Hua, 34, said she prefers the food options available at Tots and Teddies, where her four-year-old son is enrolled. She does not think he would grow up and become entitled, or exposed only to children from wealthier socio-economic backgrounds. "I don't think kids at that age compare things like how much their T-shirts cost. As long as the environment is right for them and they learn, it's good enough."

A version of this article appeared in the print edition of The Straits Times on September 18, 2017, with the headline 'No price too steep for their children's comfort'. Subscribe
Topics:
More
Whatsapp Linkedin FB Messenger Telegram Reddit WeChat Pinterest Print Purchase Article Copy permalink