In Ms Kok Li-en's class in Eunoia Junior College, students have to keep a blog where they write their personal responses to current affairs issues they care about - such as race relations or education in Singapore.

She believes that the key to teaching General Paper (GP) is to "focus less on telling them, and focus more on enabling them to deal with current issues critically".

For instance, Ms Kok recently brought up in class comments that Professor Tommy Koh made at the Singapore Bicentennial Conference on Oct 1. Many Singaporeans, the veteran diplomat had said, lack the civic-mindedness that citizens of an advanced country should have.

Ms Kok said that rather than focusing on whether the comments were right or wrong, her class discussed the contexts which contribute to beliefs and values, and shape the behaviour of individuals.

"For instance, was it our economic story? Our circumstances of rapid economic growth? People have different beliefs and values. It's about teaching students to see from different perspectives."

Ms Kok, 29, was one of nine educators to receive the Inspiring Teacher of English Award yesterday at the National Library Building. A total of 122 educators were nominated.

The award, now in its 12th year, recognises exceptional educators at primary, secondary and pre-university levels who teach English, English literature and GP. 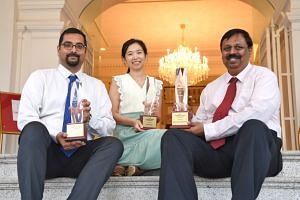 The Teaching Award is for teachers who, among other things, exemplify the use of good spoken and written English. The Leadership Award is for heads of department, and subject and level heads who have planned and implemented an English language programme in a sustained manner while also developing the professional expertise of the teachers in their schools.

Senior Parliamentary Secretary for Manpower and Education Low Yen Ling, who presented the awards, said that "teachers are central to the delivery of quality learning experiences that inspire our students to be empathetic communicators, discerning readers and creative enquirers".

She said that beyond the technicalities of the language, higher-order thinking skills and the ability to express nuances will be emphasised in the refreshed English syllabus next year. "For students who only access and use English in the school environment, we must offer them adequate opportunities in a rich language environment to build their linguistic capital," she added.

Teaching Award winner Marianne Cheong, who teaches language arts and literature in National Junior College, said she hands out articles from The Straits Times to get her students thinking about current affairs.

"If the story has an impact on them, I will ask them what they think of how it's been reported, and whether, to them, it's a fair representation of what they experience," said Madam Cheong, 59.

Each winner received a trophy, a certificate and a cash award of $2,000. The award is presented by the Speak Good English Movement and The Straits Times, with support from the Ministry of Education.