SINGAPORE - Students and staff from Ngee Ann Polytechnic (NP) are raising funds for villagers hit by the recent spate of earthquakes in Lombok, Indonesia.

Close to $20,000 has been collected so far in a campus donation drive started on Monday (Aug 6), with plans to use the funds to rebuild damaged infrastructure using quake-resistant materials, and to develop programmes to help the affected communities.

The Singapore Red Cross has also started a public appeal to raise funds, with more than $42,000 collected from online fundraising platforms as of Sunday afternoon (Aug 12).

On Monday, it had contributed $50,000 to the Lombok relief effort, which will fund the purchase and distribution of relief items such as mats and blankets, and also support disaster recovery efforts.

For the NP students and staff, the cause was especially close to their hearts as some of them have been travelling regularly since 2014 to villages in northern and eastern Lombok, to work with the local communities there to build libraries and kindergartens, and conduct English and IT literacy courses.

These were the same areas badly affected by the recent earthquakes - including a 6.9 magnitude quake that struck the island last Sunday, flattening houses and leaving thousands homeless.

The extent of the disaster - which has killed more than 380 people and and left around 13,000 injured - hit home hard for many NP staff and students, who received first-hand accounts from friends there.

The Lombok donation drive, which ends on Sept 3, and is organised by the polytechnic's Office of Service Learning, School of Design and Environment, and School of Business and Accountancy.

Over the past four years, more than 200 students from these two schools have made two-week trips to the villages of Sembalun Lawang, Sembalun Bumbung and Obel Obel, under the Youth Expedition Project (YEP) programme. Early Childhood Education diploma students, from the School of Humanities and Social Sciences, have also taken part.

Mr Raja Mohammad Fairuz, 39, a lecturer from the School of Design and Environment, told The Straits Times: "Some of the houses we stayed in have collapsed... Many houses were built using bricks and concrete and not reinforced."

Mr Raja said a four-man team will be sent to Lombok within the next two months, to make an assessment of when to resume the YEP programmes, and how else to render aid. 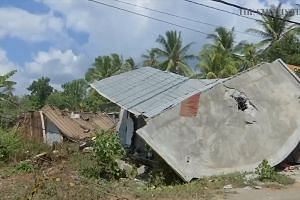 He said this could be in the form of providing counselling to those affected by the disaster, developing business programmes to improve villagers' livelihoods, and also beefing up early childhood education.

Mr Ng Hoe Chuan, 60, a senior lecturer with the School of Business and Accountancy, said: "Many of the people are emotionally traumatised, as the aftershocks happen so frequently. Many are sleeping outdoor in tarpaulin shelters, as they are afraid their houses will collapse."

While she graduated from Ngee Ann Polytechnic earlier this year, Ms Katherine Tay, 21, is encouraging her family and friends to chip in.

Ms Tay, who visited Sembalun Lawang in March 2017 to help construct a classroom, said: "What would take a very little out of us will go a long way (to help the villagers), so I'm trying my best to advocate for this fund raiser."