SINGAPORE - A childcare centre, nursing home, dialysis centre as well as an urban farming area will soon be built on the site of the former Henderson Secondary School, in what is touted as a creative way to boost interactions between young and old.

Children from the centre can also run around in the farming area and learn to appreciate nature, said Mr Victor Bay, chief executive of the PAP Community Foundation (PCF), which will be operating the pre-school.

This will be the first integrated space for childcare, healthcare and urban farming, said the Singapore Land Authority.

Plans for these facilities were announced on Tuesday (Sept 25) by Minister for Social and Family Development Desmond Lee.

He said: "These kinds of purposeful uses of old school sites enable some thoughtful and creative and innovative programming to allow the children, urban farmers, the local community and the seniors in the nursing homes to interact with one another and to find win-win solutions."

The pre-school, a large childcare centre that can take in 250 children, will start accepting registrations early next year and start operations at the end of next year.

As for the farming area, there will be a tender based on price and quality at the end of next month.

"One key criterion is that the site is used for new technologies in urban farming and that they involve local communities, including the pre-schools," said Mr Lee. 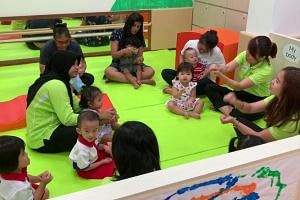 $20 million boost for professional development of teachers at PCF Sparkletots

The minister said last week that the Government was looking for opportunities to bring nature to pre-school children.

Speaking at the opening of a pre-school in Bishan North on Tuesday, Mr Lee said outdoor learning will help develop "a generation of young children who are resilient, who enjoy the outdoors, who value and appreciate nature and by extension have a greater appreciation for things beyond self".

The pre-school in Henderson will add to nine existing large childcare centres run by various anchor operators. Over the next five years, 40,000 more pre-school places are expected to be added across Singapore, especially in estates with more young families.

Mr Lee said that while large childcare centres are added to places with significant demand for childcare, such as Punggol and Sengkang, "we are not averse to building them in more mature estates where demand is strong, such as in Henderson, where we have new developments, new redevelopment sites and new families coming in".

PCF's Mr Bay said that having the childcare centre at the same site as the nursing home and dialysis centre allows for inter-generational activities.

"This will give the children a holistic education with the extension of the classroom. At the same time, it also cultivates certain useful life values in them, like resilience, care and respect for the elders and the communities and for nature."