More than half of the schools here are now serving healthier meals with less fat, sugar and salt, and each with a serving of fruit.

But even as parents applaud the move, the prices of food in school canteens have gone up and some prefer if their children are not limited to buying full meal sets, when all they want is a small snack.

The Health Promotion Board (HPB) told The Straits Times that 209 out of more than 360 schools, including junior colleges, have joined its Healthy Meals in Schools Programme (HMSP) - an initiative set up in 2011. Of this, 15 schools joined this year. 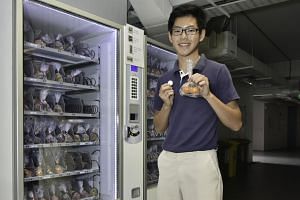 What's out, for instance - drinks without the Healthier Choice symbol, adding sweeteners to fresh fruit juices and "pre-deep-fried items", the last a new addition to this year's updated guidelines.

What's in - set meals containing portions from the four main food groups - brown rice and wholemeal bread, meat and others, fruit and vegetables.

Cooks and canteen vendors are also given training by nutritionists and chefs on healthier cooking methods, such as using ovens and grilling, instead of frying.

An HPB spokesman said the scheme "has seen a steady growth over the last four years", as schools see the importance of developing good eating habits from young. HPB reviews the programme's requirements frequently, she said.

Still, serving healthier food comes at a cost. At the School of Science and Technology (SST), for instance, prices of most meals, which now range from $2.30 to $2.50, have gone up by about 30 cents to account for higher costs.

HPB told The Straits Times that it works closely with schools on meal planning and cost considerations.

It also suggests to vendors a range of suppliers and distributors which provide ingredients such as brown rice, wholegrain fresh noodles and soft margarine at affordable prices.

A spokesman for the Ministry of Education said: "There may be a nominal increase in the price but the prices remain significantly lower than at public eating places.

"Care is taken to maintain affordable food prices and that students will get value for money."

"But for every meal, there are always two options - normal or large portions," he said.

"It's important for students to have at least one healthy meal in school. It's also our responsibility to educate them on food choices," he added.

Parents are glad their children are eating healthily, although it means increasing their allowance.

Mr Ricky Ee, a senior engineering specialist whose two children are in Zhenghua Primary, said: "Kids nowadays don't have very healthy diets. The food is more expensive now, but it will be worth it in the long term."

Wayne Chia, 15, a Secondary 3 SST student, said: "Even though meals are now slightly more expensive, I enjoy being able to have fruit along with my food."

But some parents, like Madam June Tan, who packs food for her Primary 3 daughter in Admiralty Primary to take to school, felt that students should not be "forced" to buy fruit along with dishes.

"Sometimes she just wants something extra and not a whole set. The porridge she usually buys used to cost 70 cents, but now she says it is $1.50 because it comes with longans and a slice of watermelon. Children should be given a choice, or it could result in food wastage" said the 44-year-old, who runs an online clothing business.