In the first of a four-part series, Education Minister Ong Ye Kung explains why he places skills above degrees

A man who places such a high premium on skills over the paper chase does not mind sharing that this year, under his watch, more school leavers will be able to land a place in the local universities.

The cohort participation rate (CPR) - or the proportion of those from this age group making their way to universities - will rise to 37.5 per cent from 35 per cent last year.

Despite the shrinking cohort size, this means the number of those heading to the six publicly funded universities is still higher than last year's figure and translates to just over 16,000 places.

Between them, they will enrol in over 250 degree programmes, including new courses in emerging fields such as smart city management, data science and artificial intelligence.

Education Minister in charge of Higher Education and Skills Ong Ye Kung, who revealed this in an interview with The Straits Times, says with the increase, the Ministry of Education is well on track to meeting the 40 per cent cohort participation rate that the Government aims to achieve by 2020.

What happens after 2020? Will this figure be relooked? After all, there has been much discussion recently on the Singapore economy needing a more highly educated and skilled workforce.

Minister Ong says the figure of 40 per cent for 2020 refers only to funded places at the autonomous universities for junior college or polytechnic students proceeding to full-time undergraduate studies before they enter the workforce. 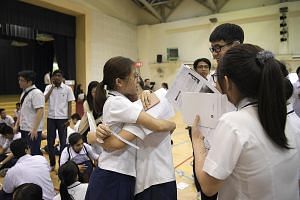 Putting universities to the test

It's hard to say. When I was young, I was always interested in art. I drew comics, superheroes, gongfu characters - so if I were to follow my interests it will probably take me into art - perhaps digital animation. I will look at what course will train me best in those skills, so I will probably go to a polytechnic. If there is a degree in that field, I might go for it, provided it could teach me the skills I need. But having said that, I am also interested in science and maths, and if I go with the flow of what is expected of me, I may take a degree pathway, especially since degrees are still the dominant currency.

MR ONG YE KUNG, on whether he would choose the skills or degree path if he were 18 again and heading to further studies.

It does not take into account those who study part-time for degrees at both the public and private institutions here as well as those who head overseas. If these figures were included, then the proportion of degree holders among an age group is likely to be 50 to 60 per cent, similar to that for many developed countries.

But pressed further, he says: "In time to come, we hope that 100 per cent of Singaporeans will have skills or qualifications that are on a par with having a degree, or even master's, in terms of job prospects."

He stands by his constant refrain that Singaporeans should stop believing that university education is the only way to develop an individual's potential.

"This could be in the form of a degree, a master's, a specialist diploma, an accumulation of short courses attained in different phases of your life, or just something that the industry knows you are good at, without any paper qualifications. It is about having a high level of expertise, passion and mastery in a particular area, " he says.

Although university degrees are the "currency" to land good jobs at the moment, he stresses that deep skills are what will count for career progression.

He notes that Singapore's economy has diverse needs and will require diverse talents from a spectrum of expertise. As such, the Government is looking at providing "diverse and multitudinous" pathways for people to build skills.

"Ultimately, it is not about having a degree for its sake, but about skills for work and for life. Throughout their lifetime, everyone should have that depth of knowledge and agility in applying their skills in different contexts. There are many paths to arrive there.

"One dominant path is to study, get a degree and work for the rest of your life. For that, we have a CPR that we plan for. Even in that traditional path, we are trying to make it more varied, through different universities, different teaching methods, different subjects and different domain expertise."

But he admits that many employers still hire on the basis of qualifications, and this gets in the way of Singaporeans chasing skills instead of degrees.

"I speak to many employers and the bosses all agree with the idea of looking beyond academic results and degrees. Yet, they have not changed their hiring practices significantly. One employer of a fairly big company recently told me that he hires for skills, but when elaborating, he said he doesn't just go for second upper honours any more... Now he hires graduates with second lower honours as well."

Mr Ong urges employers to "go through the trouble" and be open to using various assessments and to hire based on skills, so as to find workers with the right fit to grow their businesses.

He goes on to list the important skills - both hard and soft - that all Singaporeans, including graduates, should acquire .

Because technological changes are "turning industries upside down", graduates need to understand the latest technologies and be able to work with them.

"I am not saying you need to be a coder or an IT expert. But it will be good to have a basic understanding of technology and how it can be used in the field you are in."

With the advance of artificial intelligence, he advises Singaporeans not to be like robots.

"If you work like a robot, you will be replaced by a robot," he said. In this era we must be "more human than ever - in anything we do", he says, pointing to the fact that AI is not very good at jobs that require creativity, empathy, critical thinking, leadership or artistic expression.

The other force to be reckoned with is globalisation, which is still gathering pace.

"Singapore's economy will become more connected than ever to the region and the world," he says. So Singaporeans must aim to take a cue from the expatriate talents coming to the Republic. They must have the hunger and sense of adventure to go out of Singapore and seize opportunities in a foreign land.

And Singaporeans must be able appreciate and operate within different cultures. Mr Ong reminds graduates that with half of their peers holding degrees, they cannot rely on just their qualifications to stand out from the crowd.

"In this landscape, you can no longer say, 'I am a degree holder and am therefore different from others.' You have to go beyond that. You have to develop a niche... and be able to sell and present that niche as your area of mastery and differentiate yourself," he says.

Asked if he would place skills above degrees, he says it need not be one above the other.

"The traditional view is that a degree is above skills, but that is because when we think of skills in Singapore, we think of vocational skills acquired through polytechnic and Institute of Technical Education courses.

"You accumulate knowledge through a degree course, but to convert the knowledge into something useful to society, you require skills. Skills are something that activate your knowledge. From that perspective, skills are above degrees.

"The truth is, both are needed - it is a mesh of what you know and what you can do."

He stresses that parents, students and employers all need to embrace this larger definition of skills future.

"That's really the skills we're referring to in SkillsFuture," he says, referring to the national movement to harness the aspirations and talents of the population and encourage Singaporeans to keep on learning and upgrading their knowledge and skills.

He hopes that society as a whole will recognise and celebrate the spectrum of success in different fields. " If society sticks to a narrow notion of success, then we will always be stuck in it. Society must embrace them all. Only then will we have true diversity in meritocracy... not just academic meritocracy but a meritocracy of skills."

A version of this article appeared in the print edition of The Straits Times on February 26, 2018, with the headline 'Minister: Skills are something that activate your knowledge'. Subscribe
Topics:
More
Whatsapp Linkedin FB Messenger Telegram Reddit WeChat Pinterest Print Purchase Article Copy permalink