From next year, pupils at a mainstream primary school will have deaf classmates learning alongside them in sign language as a further step is taken towards greater inclusiveness.

For the first time, Mayflower Primary in Ang Mo Kio will take in up to seven pupils with hearing loss in its Primary 1 cohort.

It is the first designated primary school for pupils with moderate to profound hearing loss who want access to the national curriculum.

Senior Minister of State for Education Janil Puthucheary said at the launch of the International Week of the Deaf yesterday that Mayflower Primary was chosen for its central location, and proximity to Beatty Secondary in Toa Payoh, which also caters to deaf students who use sign language.

Both schools may share resources and activities over time.

"It is my hope that this new educational model will bring benefits to both students with and without hearing loss," he said. 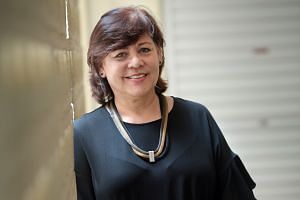 Singapore School for the Deaf to close due to dwindling enrolment

Pupils with hearing loss build confidence and social skills as they integrate into the school community and interact with hearing peers, while hearing pupils build empathy, acceptance and respect for differences and diversity, he said.

Eventually, Mayflower Primary will take in 40 to 50 deaf pupils at different primary levels.

The guest of honour at the launch, held at the Singapore Association for the Deaf (SADeaf), was President Halimah Yacob.

The Ministry of Education (MOE) said that SADeaf will continue to play a key role in training and providing teachers and support staff (see report below).

At Mayflower Primary, sign language will be used to support instruction for pupils with hearing loss. This will come via two specialised teachers from SADeaf, who will co-teach the core subjects of English, mathematics and science.

An educational sign interpreter will support non-core subjects such as physical education, art and music.

About four in 1,000 babies in Singapore are born with hearing loss each year. About one in 1,000 will have severe hearing loss.

Mrs Lim-Chua Siow Ling, Mayflower Primary's principal, said that it will raise awareness of the needs of the deaf pupils among the school community.

For instance, a handful of Primary 5 pupils will be trained in simple signing and be paired with a child with hearing loss during play and recess time.

The school will also offer an after-school elective programme next year on Singapore Sign Language for teachers and Primary 1 and 2 pupils.

"The most powerful way for our children to learn empathy is through the day-to-day interactions and play, during learning journeys, recess, and out of the classroom," said Mrs Lim-Chua.

Madam Christina Lim is glad that her six-year-old daughter, who is profoundly deaf and uses cochlear implants, will start school at Mayflower Primary next year.

"I believe in bilingualism. Just like how we learn English and Chinese, children with hearing loss should learn English alongside sign language, which is part of their identity," said the 29-year-old private tutor.

"My main worry is that the mainstream children won't know how to communicate or interact with hearing-impaired kids."

Ms Barbara D'Cotta, currently the vice-principal for the Singapore School for the Deaf, will be posted to Mayflower Primary as one of the two specialised teachers.

They will co-plan lessons and tweak teaching methods to suit the needs of pupils with hearing loss.

"For instance, in listening comprehension classes, we would use more visual phonics - signing or mouthing words and sounds for them to learn to lip-read," she said.

Studying alongside mainstream peers can help pupils with hearing loss to fit into society, she added.

"It's good to start in their early years, because when they grow up, they have to interact with the mainstream population.

"It's going to be an exciting and challenging experience for them, to be given the same exposure and opportunities in a bigger school, and hopefully grow up more confident."