Fees at Kindle Garden, touted as the first inclusive pre-school here, will jump next year to up to twice the current amount, just two years after the opening of the centre.

In what is considered a rare move in the pre-school sector, the centre will also adopt a tiered-fee model, with low-income families charged less, The Straits Times has learnt.

Some parents of children enrolled in the centre were taken aback by the extent of the fee hike. When pre-schools raise fees, most do so by 5 per cent to 10 per cent.

Kindle Garden told parents last week that it would raise fees from $980 to $1,880 a month for full-day childcare from January next year. This is before factoring in the goods and services tax, and subsidies from charity Awwa, which runs the centre, and the Government.

The median fee for full-day childcare is $867 as of the end of June. 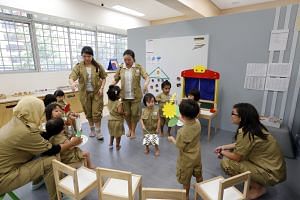 The centre has 83 children enrolled, of whom 30 per cent have special needs and learn alongside other children. Its staff include therapists and psychologists. It has a grant from the Lien Foundation, a philanthropic house.

In a letter to parents, the centre said that when it was piloted, the funding helped to cover resources and operating costs, and fees were heavily subsidised. "Post-pilot, as a social enterprise, Kindle Garden will be self-sustaining. As such, there will be a revision of fees... to reflect our operating costs," it said.

Mr J.R. Karthikeyan, director of education and development at Awwa, told ST the fee hike is due to the $3.6 million grant from the Lien Foundation being used up.

"That was meant to last us for three years from 2015, and this experimental model needs to be self-sustainable," he said. Without the fee hike, he estimates that Awwa will face a "huge deficit".

Meanwhile, Awwa hopes its tiered-fee model will allow children from low-income families to still benefit from its services. Different amounts of Awwa subsidies are given to families, based on which of the six income tiers they are in. Families in the lowest tier, with monthly per capita income of up to $1,125, will get Awwa subsidies of $900.

The highest tier applies to families with monthly per capita income of more than $3,500, and those who do not want to give income information and be means-tested. They will not receive Awwa subsidies and will be charged $1,880.

Awwa said the new fee model will apply to at least 64 children.

Said Mr Karthikeyan: "We wanted this subsidised fee model, so children of different socio-economic levels can be in the same centre... Nobody would be left behind. If parents have difficulty paying, we'll review it on a case-by-case basis."

The Early Childhood Development Agency, which oversees the pre-school sector, said it knew about the fee increase but it does not regulate fees charged.

A mother, who has a child in the school, said: "This has greatly impacted kids who transferred there from other pre-schools. I am torn between whether to stay or move, as moving means my child would go to a third childcare centre. "

A father of another child agreed. He said: "The centre should do a bit more to support parents who supported it when it started out."