On the other two days of the week, he dons his school uniform to report for lessons at Assumption Pathway School (APS), where he can also seek advice from his job coach, Mr Ronnie Ho.

While Wei Ming enjoys his work at the hotel, he has been late on a few occasions as he lives in Yishun and his journey to work takes more than an hour by public transport.

Mr Ho, who used to work in the hospitality sector, has given Wei Ming time management tips, such as timing how long he needs to prepare and get to work on time, and planning his schedule accordingly.

Wei Ming, who noted that his workplace mentors are kind to him too, said: "I don't want to be late. I can't be late."

I tell myself that I'm here to give the students a helping hand and to lift them up. With this lifting, they can go much further in life.

He is one of nearly 60 students in the first batch of a two-year work-study programme that started early this year to help ease students from APS and NorthLight School into the workforce.

The two schools cater to those who did not pass their Primary School Leaving Examination. Students spend four years there and specialise in a vocational skill.

About six in 10 of the students from the two schools move on to the Institute of Technical Education (ITE); those who do not qualify for the ITE are given the option of joining the work-study scheme as they may not be ready to join the workforce.

Under the programme at the two schools, named NorthLight Academy (NLA) and Assumption Pathway Academy (APA) respectively, students spend two days in school to brush up on English and maths as well as to learn workplace and life skills such as teamwork and personal effectiveness.

They receive an allowance of about $450 for a month's work.

The two academies began with an initial targeted intake of 30. APA now has 29 students, and NLA, 27.

Job coaches and counsellors support the students. The job coaches help ensure that organisations in the programme have structured training schedules and mentors to help the students at work, while the counsellors look after the students' emotional welfare.

The programme aims to benefit both the students and companies involved, said NorthLight vice- principal Jayvin Yeo. "In today's job market, these students can easily get a part-time job, especially in the service trade," she said. 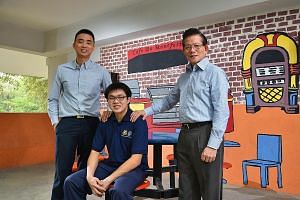 Students can opt to work in social enterprise or school

But they are still young and need guidance, she said. "When they are faced with difficulties, they can turn to the job coaches for help instead of giving up easily."

APA's Mr Ho said most teens aged 17 to 19 find it hard to enter the working world full-time. It is also a worry echoed by their parents.

"(The teens) may not have the right mindset yet. If they were left on their own at the workplace, some may give up after a while," he said.

Students in the work-study scheme are hardly left on their own - job coaches monitor their progress by visiting them at their workplaces regularly and having discussions with them in school.

Some students may have relationship or family woes and these may affect their work performance, job coaches say. But these issues could be hard for a workplace mentor to detect, and students may find it hard to express themselves. 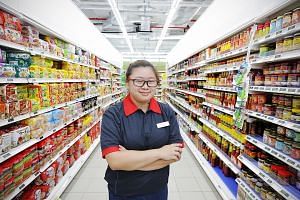 APA job coach Royston Alvin Ang said: "Some mentors may be more focused on the operational tasks and may not know how to deal with our students."

Said Ms Yeo: "We understand our students better and some challenges they face may be multi- faceted. We can work closely with the industry to help them."

When the students' problems are heard and resolved, they will persevere in their work, she added.

The job coaches are always on the lookout for worrying signs like absenteeism, latecoming and the frequent taking of medical leave. They visit students' homes to talk to their parents if the need arises.

Mr Ho added: "We do a lot of follow-up, a lot of parenting and mentoring."

NLA job coach Lim Peck Gee does not let her students know she is popping by and observes them at work from afar.

"You can sense whether a student is doing it right from their facial expressions when they talk to people at their workplace. We have to pick up on these signs," she said.

Companies are happy to get involved in the programme.

Mr Darren Lim, human resource director at Pizza Hut Singapore, said it partnered NLA as it hopes to train Singaporeans to take on jobs. "It can be tough attracting people to join the food and beverage industry. The easy route is for us to hire foreigners, but that's not what we want. We want to groom Singaporeans in this industry too," he said.

NLA student Rakesh Pandey, 17, who is attached to a Pizza Hut outlet where he serves customers, said the programme "lets me study for two days and gain skills for three days".

The programme's goal is for the teens to be equipped with the skills and attitude that will help them secure long-term employment.

While the programme runs for two years, if a student is ready for full-time work at the end of the first year and an opening arises, the schools are happy to let him go.

"This programme is meant to help them assimilate to the work environment and move on. However, we will still be here to lend support," said Ms Yeo.

But there are also students who leave the programme because of negative peer influence.

NorthLight job coach Andrew Tan said: "We may not have a success rate of 100 per cent... But I can tell that the students are improving. And these are the intangible rewards that keep us going."

Ms Lim, his colleague, added: "I tell myself that I'm here to give the students a helping hand and to lift them up. With this lifting, they can go much further in life."

For Wei Ming, the programme has given him an idea of what he hopes to do in future. He hopes to return to work at the Grand Copthorne Hotel after he completes the programme and serves national service.

"I like what I am doing and I like my colleagues. But I hope to one day work in the hotel's kitchen and be a chef. I like to cook," he said.

A version of this article appeared in the print edition of The Straits Times on October 26, 2015, with the headline 'Grooming students for the workplace'. Subscribe
Topics:
More
Whatsapp Linkedin FB Messenger Telegram Reddit WeChat Pinterest Print Purchase Article Copy permalink