SINGAPORE - A Greek language expert has jumped into the fray and given his view about how the name of Singapore's newest junior college should be pronounced.

Dr Francesco Perono Cacciafoco, research fellow at the Nanyang Technological University, from its school of humanities and social sciences, told The Straits Times on Thursday (Dec 31) that the correct pronunciation of "Eunoia" is "eh-yu-no-ya", with the stress on the first syllable.

The Ministry of Education (MOE) had unveiled the name on Tuesday, saying that it was pronounced "yoo-noh-iea". The word, which means "beautiful thinking" and "goodwill towards others", was chosen as it resonated best with the college's vision, mission and values, it said.

But the name, with Greek origins, caused some confusion about its pronunciation.

Dr Perono Cacciafoco, who has a PhD in historical linguistics and Greek and Latin philology and literature, said that "Eunoia" is an ancient Greek word, and is a composition of words that mean "well" or "good" and "mind" or "spirit". 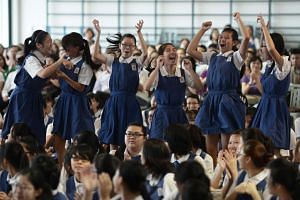 He added that the word had been used by Greek philosopher Aristotle to refer to the goodwill of a spouse that forms the basis for the ethical foundation of human life. The Roman writer and philosopher Marcus Tullius Cicero had translated the word into the Latin word now known as "benevolence". 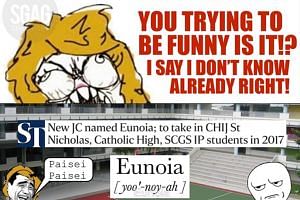 Singapore's newest JC is called Eunoia - you know, ya?

Meanwhile, other people who study the Greek language say the word "Eunoia" may be pronounced differently as there are several versions of Greek from ancient to classic and modern times.

Some said that "Eunoia" should be pronounced as "yoo-noy-iea" as the second syllable contains a diphthong - a sound made by combining two vowels, like the oy sound in oil. But in modern Greek, the first syllable of the word may be known as "eff" or "ev" instead of "eu".

When contacted, MOE said it would be sticking to its original pronunciation.

The name was chosen after months of interaction with students and staff from the three schools, and their management committees, and had been picked from about 200 suggestions.

While some people thought that the word was meaningful, many felt that it was too abstract and unrelatable to ordinary Singaporeans.