As a child, Emma Tan Xin Rong tagged along with her civil engineer father to his work at construction sites.

Now 17, the Singapore Polytechnic (SP) student is following in his footsteps - but on a different path. Instead of learning the old labour-intensive methods of construction, Emma is picking up computer programming, digital design and modular construction skills as part of her civil engineering course.

"The world is changing, and I am now learning things that my dad doesn't know about," she said.

From young tech wannabes to women who used to shun the male-dominated construction industry, different groups are now being wooed to join the sector.

The success of these efforts will determine if the Government can achieve its goal of reducing the construction industry's dependence on foreign workers.

Practically all the construction workers here are foreigners, numbering some 300,000.

There are no available statistics on the foreign-local breakdown for the overall industryit wants more of such jobs to go to Singaporeans.

Two-thirds of those trained - numbering 32,600 - in skills like digital design are Singaporeans and permanent residents, said a Building and Construction Authority (BCA) spokesman. "We would like to grow this proportion as they represent good jobs for Singaporeans."

Most of the youth interviewed remarked how "exciting" the construction sector looks set to become, shattering their own expectations of the industry.

A task force, co-chaired by BCA, schools and industry associations, is now looking into creating a new curriculum for both students and those already working. Their recommendations are slated to be out by late next year, the BCA spokesman told The Straits Times.

One idea includes a capstone programme for current graduating students, potentially forming part of their pre-internship training. This could take shape in the form of an advanced final-year project that uses BIM and DfMA.

Said National University of Singapore final-year civil engineering undergraduate Tan Jing Qun, 24: "Growing up in an IT-savvy environment, we are the young generation that can be the pioneers for such technologies. There is a pressure on us to pick these all up quickly, but it is exciting."

Even lecturers themselves need to change, as BIM and DfMA technologies did not feature in their own education. Said BIM lecturer Melody Wu, 35, from ITE: "In my civil engineering days before joining ITE in 2013, I had heard of BIM but never really practised it. Now I have to pick up these skills quickly first before I can even teach the students how to do it." 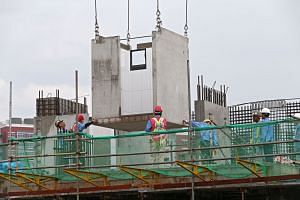 As SP senior lecturer Teo Kian Hun puts it, the industry is now moving in a direction that is more attractive to eager young people.

Currently, many of the 160 or so students who join the School of Architecture and the Built Environment each year are male, have familial connections to someone within the industry or come from other countries such as Malaysia and Myanmar. The change in image for the industry will surely shake things up, he said.

"The industry used to be known as 3D - dirty, demeaning, dangerous. Now it is a different kind of 3D, one that leverages 3D design technologies to bring new groups into the fold."