Even as the Government increases university places here, Singaporeans continue to flock overseas for degrees.

The profile of those leaving Singapore for universities overseas, however, has changed. Many of them are no longer polytechnic graduates but A-level and International Baccalaureate diploma holders.

Many have top scores and places in the local institutions but feel that an overseas degree from a prestigious institution such as Oxford, Cambridge or Imperial College London will give them an edge. 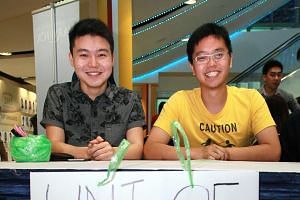 Last year, Singaporeans came behind only the Chinese among non-British undergraduates studying at Oxford and Cambridge.

In the United States, too, the universities that account for the most Singaporean students are among America's most prestigious.

Finance and economics are the top choices for Singaporeans studying in the US.

Figures also show that over the last five years, more Singapore students have been heading to British and Australian universities to take up professional degrees. British Council figures show that the number of Singaporean students in Britain went up from 4,000 in 2009 to 7,000 last year. Tellingly, 1,390 of them are reading law and another 465 are studying medicine and dentistry.

Of the 6,300 Singaporeans in Australian universities, 300 are studying law, 108 dentistry and 66 medicine.

He said: "They have top grades, so they aim for the best British universities and the most competitive degree courses. Despite the limited number of places, they get in."

He said many are looking for top-notch degrees in law, medicine or dentistry. He noted that it would cost $70,000 on average a year to study those courses. For medicine which takes five years, it would add up to around $400,000.

British and Australian universities say that they are keen to have Singaporeans as they are high-performing students.

Imperial College London, which partners Nanyang Technological University to run a medical degree programme in Singapore, currently has 59 Singaporeans studying medicine in London. Five years ago, it had fewer than 10.

Professor Jenny Higham, vice-dean (education and institutional affairs) of the medical faculty at Imperial, said Britain's general medical council restricts the intake of international students and Imperial requires top grades for admission to medicine, but a significant number of Singaporeans who apply to Imperial meet the univer-sity's standards.

Twelve of 21 students interviewed had one offer, if not two, from the local universities, but still chose to go overseas.

National Institute of Education don Jason Tan said this was another example of "parentocracy" at work, where parents seek to provide advantages to their children.

"It is not just an elite degree from an elite institution.

"It is also the social and professional networks that their children will acquire by studying in these elite institutions," he said.