As a student at Tampines Junior College (TPJC), Mr R. Ramana had a gift for economics and served in multiple leadership posts.

Outside of school, he was his mother's voice.

Madam Sumathi Meyyappan has been unable to speak or hear since birth and often relies on her son, who is proficient in sign language, to communicate on her behalf.

The 18-year-old full-time national serviceman takes turns with his family members to go with her to the various community events she is invited to. "My mother is independent and takes care of herself," said Mr Ramana.

His mother, who works as a laboratory assistant in a secondary school, uses writing to communicate with others when she is alone.

His father works at a warehouse, and he has two siblings. 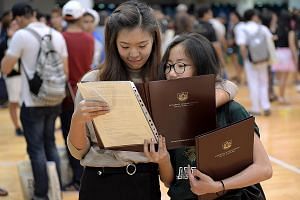 Class of 2016 scores well in A levels

Ramana exemplifies maturity, responsibility, diligence and perseverance. He takes initiative over his own learning.

Knowing the challenges faced by his mother helped instil in Mr Ramana a desire to help others. At school, he led the implementation of a service learning project to benefit migrant workers in Singapore after returning from a service learning trip to Vietnam.

But the greatest obstacle Mr Ramana said he faced at TPJC was time management - he was vice-president of the Indian cultural society, orientation group leader and an A division footballer.

Being "not exactly a fast learner" by his own admission, his multiple commitments affected his academic performance. Thankfully, his teachers were there for him, staying well into the night for consultation sessions to help him keep up with his lessons. He did them proud by scoring four distinctions.

Mr Ramana also credited his principal, Ms Pamela Yoong, for being "one of the most caring people" he had ever met and added that she always ensured the welfare of students in the school.

When asked about his ambition and plans for the future, he said he would like to study computer engineering on a scholarship and start a technology company.

"My long-term goal is to launch a social enterprise or voluntary welfare organisation to help others."