So busy with in-camp commitments that he booked out late, full-time national serviceman Alex Tan did not have time to feel nervous about his A-level exam results.

"The events felt tumbled together," said the 18-year-old who scored eight distinctions - five of which were for H2 subjects.

Like him, some 12,538 students who took the A levels last year received their results yesterday, marking yet another milestone in their educational journey.

A total of 92.6 per cent of the cohort achieved at least three H2 passes, with a pass in General Paper (GP) or Knowledge and Inquiry (KI).

This is the second-best performance by an A-level cohort since the curriculum was revised about a decade ago. 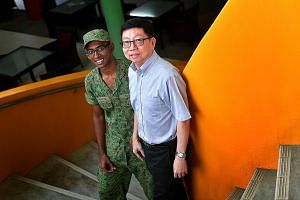 The previous year's performance - 93.1 per cent of that cohort got at least three H2 passes and a pass in GP or KI - had set the benchmark for the highest pass rate.

And, as a whole, the last three cohorts attained the three highest pass rates since the curriculum was last revised.

Responding to queries, the Ministry of Education said the pass rate for the 2016 cohort was "comparable to figures in the previous years and within the usual year-on-year variations".

"The greater emphasis on critical thinking skills and improvements in educational and learning resources by schools are likely to have contributed to this trend," said Dr Seah.

Still, academic excellence is not the sole area of focus at junior colleges across Singapore.

Ms Beatrice Chong, principal of Anglo-Chinese Junior College, told The Straits Times that her school also celebrates the non-academic achievements of students when the results are released.

"While our students are personally driven and highly aspirational, it is also important for them to learn how to be gracious, and to rejoice and celebrate with others," she said.

Those who are SingPass account holders can log in to the Examination Results Release System (iERRS) to obtain them online. This can be found on the Singapore Examinations and Assessment Board's website at https://ierrs.seab.gov.sg/.

Results were available on the website from 2.30pm yesterday.

A version of this article appeared in the print edition of The Straits Times on February 25, 2017, with the headline 'Class of 2016 scores well in A levels'. Subscribe
Topics:
More
Whatsapp Linkedin FB Messenger Telegram Reddit WeChat Pinterest Print Copy permalink