Anytime stress is removed or reduced from our children today, I am glad, because I am, without apologies, an indulgent and over-protective father of two young girls.

At six years old this year, my younger daughter Sarah will be affected by the announced changes coming to the PSLE, which will take effect from 2021.

My older daughter, Faith, who is nine, will take her PSLE under the current system.

In theory, I am not thrilled for Sarah that her PSLE results will no longer be based on how she does relative to her peers, as it is now, even though this should lessen the stress somewhat.

Nor am I dejected for Faith that she, under the current system, will be in direct competition with her peers, so to speak.

My desire is, and hopefully always will be, that they do the best they can, so that their abilities will not go to waste. My wife is of the same opinion.

With our attitude, I am confident neither of my daughters will be overly stressed because I believe much of the pressure children find themselves struggling under originates from parental expectations.

Sure, there are students who are peer-driven and naturally competitive, but they would probably be in the minority.

The Ministry of Education's move is laudable. In effect, though, kiasu parents will still find a way to put the screws on their children. Mark my words. No system is perfect. But the problem of stress lies largely with parents who cannot accept that their children are anything less than the best.

I don't deny that the economy is getting increasingly globalised, making the competition for jobs harder and harder.

And in urban Singapore, which has no natural resources and no farmland for the rustically inclined to subsist on, educational qualifications are crucial for employment and maybe even survival.

I certainly do not want my daughters to be jobless and unable to fend for themselves. 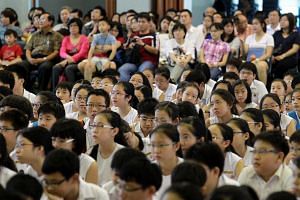 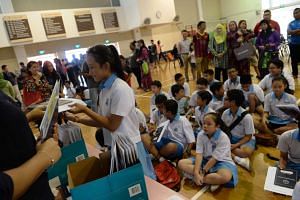 PSLE aggregate score to be scrapped, DSA to be reviewed: Education changes at a glance

But I would be happy if they tried their best throughout their school years, remained relatively happy and stress-free, and go on to make a decent living on, say, a polytechnic diploma.

I most definitely have no wish to see them suffer stress and sleepless nights to hopefully make big bucks on an Ivy League degree.

Of course, if they have the inclination to work hard because of interest and self-motivation and eventually make big bucks on an Ivy League degree made possible by a scholarship, I have no objection whatsoever.

What I do not want is a Singapore education system that is dumbed down by popular demand, just so kiasu parents can feel better about themselves or fool themselves into thinking their kids are smarter than they really are.

The world is not going to slow down for Singapore. If we in Singapore keep complaining about the rat race we inevitably found ourselves caught up in, it is because the rat race is worldwide.

Run the race as hard as you can or want to, or if you want your kids to. If you are unhappy or stressed, though, you have only yourself to blame.

On the other hand, you could try to find a pace that is comfortable, suitable and happy for you and your abilities.

When I was in secondary school, which was a brand-name all-boys institution, our classes were more or less labelled in alphabetical order according to ability and results. I was always in the mid- to lower-end classes.

MOE Committee of Supply: PSLE changes at a glance

My schoolmates at the top end have become Members of Parliament and top criminal lawyers and doctors. One of them even went straight to an Ivy League university after his O levels when he got a perfect score in maths for his SATs.

Without rancour, stress or depression, I accepted even then that they were better students than I was.

That's not the same as saying the students at the lower end accepted our fates as being inferior - we just had different abilities and priorities. Now, my classmates have become defence analysts and diplomats.

Schools these days tend to not group students into classes by ability, presumably to assuage frail egos. Mixed-ability classes do not help teachers teach better or students to learn better.

We cannot change the fact that we are not born equal. We can change our attitudes towards this fact and learn to accept failure graciously, learn from our mistakes and make the best of our limitations.

At a movie premiere event last year, my elder daughter took part in a contest to win Snoopy paraphernalia. She was booted from the contest early on, yet she and the other contestants who were eliminated early each received a huge Snoopy plush toy (the winner received an even larger one).

Naturally, she was thrilled, and so was I for her.

But should losing a contest be rewarded with a good prize, one only slightly smaller than the winner's? Sure, she put in effort, but still.

I would have preferred that she received only a token, say a keychain, for participating, Then she would have learnt to take failure in the right spirit.

I just hope the new PSLE will not turn out to be one huge Snoopy plush toy for every child who sits for it.