Mr Chan Chun Sing remembers meeting a woman from the United States Special Forces Reserves some time in the 1990s who did not quite look the part.

She had neither bulging biceps nor a six-foot tall physique, he said, but she had a unique skill.

The woman was an expert in IT and computer systems at a time when the Internet was just taking off, said Mr Chan, who is Minister for Trade and Industry and Minister-in-charge of the Public Service, in a speech yesterday.

Speaking at the Public Service Commission (PSC) Scholarships Award Ceremony at the Parkroyal on Beach Road hotel, where he awarded scholarships to 93 recipients, he shared three personal stories and the lessons he had drawn from those experiences.

From the Special Forces woman, he learnt about threats such as bugs and viruses that were not commonplace at that time.

"Because I knew a bit more, I could help my own organisation become a bit less unprepared - and that, perhaps, is all that we need to make sure that we keep Singapore staying ahead," he said.

"I hope all of you will be like her. That in your studies, you will bring back a unique skill set to Singapore, to the team; that one day... all of you will come together and wield those skills as a team to take Singapore forward." 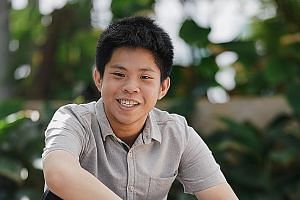 From sleeping in void decks to enrolling at Oxford

Many more from ITE can shine in academic, professional fields: Ong Ye Kung

Another anecdote Mr Chan shared was of a time in a foreign country when he had called on a regional leader, who knew Singapore merely as "that place south of the Malay peninsula".

"This left a deep impression on me," Mr Chan said. "Sometimes in Singapore, we take for granted our very existence... We forget we are a small country trying to defy the odds of history by ensuring that we continue to remain relevant.

"We have to be the one to create the relevance for others to want to engage us and for us to be of value to others."

Touching on his motivation for joining the public service, Mr Chan spoke of how he had taken a PSC scholarship for practical reasons, rather than "lofty ambitions".

"I needed a scholarship to continue my studies... Even getting to my O levels and A levels had required many scholarships and bursaries.

"I didn't aim to be a minister. I wanted to be a librarian," said Mr Chan, who later joined the Singapore Armed Forces and worked his way up to become Chief of Army.

In the infantry, he started out by learning to take care of his buddy, then section mates and fellow soldiers.

When he became a platoon commander, he had 28 men under him. With more training, the number increased until he was in charge of "a few hundred thousand men".

"The moral of the story is that life has many twists and turns," Mr Chan said. "So do not worry as to why you decided to take up the PSC scholarship.

"So long as your heart is in the right place, you will get from a few men to a few hundred thousand men, and these are fellow Singaporeans under your charge, looking forward to your service so that they all can have a better life than their forefathers."