Even as it celebrates its golden jubilee, adventure school training still relevant to today's youth

For Outward Bound Singapore (OBS), a lack of natural obstacles was certainly not an obstacle.

Unlike most other Outward Bound schools overseas, OBS could not completely rely on Singapore's natural landscape as features in obstacle courses for its trainees. It had to build facilities at its campus on Pulau Ubin, such as a multi-dimensional rock wall, climbing towers and a training pool for kayaking.

While it used to ferry over bottles of drinking water, OBS has been self-sufficient since 1995, with its own man-made reservoir catering to as many as 1,000 people a day.

The story of the outdoor adventure campus, widely seen as the first purpose-built OBS centre in the world in 1997, reflects a "can do" spirit that OBS has tried to cultivate in some 500,000 trainees over the last 50 years.

OBS - part of a global network of adventure schools modelled after a British school for sea merchants that was founded in 1941 - celebrates its golden jubilee this year.

It has come a long way here since it began in 1967 as a training ground for young men joining national service. While OBS still provides activities such as trekking and kayaking, it now caters to students from upper secondary onwards.

The never-say-die attitude from the tough training at OBS put me in good stead for the many challenges in my life.

MS JACQUELINE CHUA, 57, a retired teacher who attended OBS in 1977.

To mark its 50 years, OBS, now part of the National Youth Council, planned a series of events this year, including a homecoming last Saturday at Pulau Ubin. About 500 OBS participants, instructors and staff - past and present - relived memories, and also participated in water and height activities, and nature and heritage trails.

Mr Ng Thian Choon, 45, deputy director of programmes and partnerships at OBS, said: "Outward Bound training is still very relevant to today's generation, even into the future, because we're talking about a world where it is highly complex, ambiguous and volatile.

"This is where I see OBS, which focuses on resilience-building and strengthening social cohesion, will continue to be very important."

He said OBS will play a bigger role in youth development.

From 2020, all Secondary 3 students have to go for a five-day OBS expedition-based camp which gathers young people from different schools and aims to impart skills such as resilience and teamwork.

Currently, about 14,000 young people take part in OBS programmes each year. This number is set to triple to 45,000 by 2020, when a new OBS campus is built on Coney Island.

For Mr Muhammad Noor Shalihhin, 19, attending an OBS course in March was like going back to basics. He did not have Internet access or his mobile phone during the 21 days of the course, where he cooked outdoors for the first time.

The ITE student, who is studying for a technical diploma in culinary arts, even wrote a letter by hand to his family, which OBS staff helped to post.

Mr Muhammad Noor also learnt to push himself physically and mentally, especially during the runs.

He said: "At first it was difficult. I was always the last one. But my instructor and batchmates motivated me and pushed me to go forward.

Overcoming his phobia of heights on the 20m inverse tower - a climbing structure with objects such as tyres, ropes and logs - was another achievement. "When I reached the top, I felt so happy... I thought I wouldn't make it," he said.

Retiree Jacqueline Chua, 57, who attended OBS in 1977 and later went on to be a teacher for 22 years, said: "Before OBS, I was like a piece of drifting wood in the sea.. as my inner strengths had not been put to the test.

"But the never-say-die attitude from the tough training at OBS put me in good stead for the many challenges in my life." 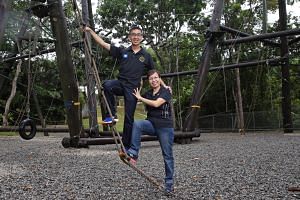 A version of this article appeared in the print edition of The Straits Times on September 18, 2017, with the headline ''Can do' spirit thrives at OBS'. Subscribe
Topics:
More
Whatsapp Linkedin FB Messenger Telegram Reddit WeChat Pinterest Print Purchase Article Copy permalink