Exposed to both languages, the energetic tot effortlessly switches between English and Mandarin when she speaks.

Science says she stands to benefit from this ability.

Bilingual infants such as Summer are able to learn a third language more easily, a study by National University of Singapore (NUS) researchers has found.

They are able to differentiate between words from an unknown foreign language, unlike their monolingual counterparts.

"That suggests that the window on further language acquisition had started to close on monolingual children but was very much open for the bilingual children," said Associate Professor Leher Singh from the NUS department of psychology.

During the nine-month study, infants who were solely exposed to English and those who knew English and Mandarin were exposed to the southern African language, Ndebele. 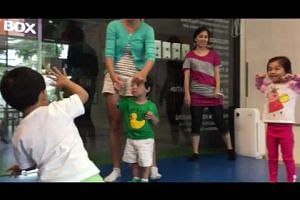 Mandarin lessons for tiny tots, some barely a year old

In one experiment, the 40 infants are shown an image and at the same time read a Ndebele word.

After that, they are shown the same image but this time a different word is read out to them.

The conclusion was made using a method that tracks the time that they spent looking at an object on a computer screen while the word was read out to them. More fixation time when the tone changed reflects a surprised response, indicating that they were sensitive to the differences.

The finding, published in scientific journal Child Development in May, further supports the theory that exposing children to two languages at the same time has cognitive benefits.

An earlier study by Prof Singh and her team found that bilingual babies can master the rules of each language faster than monolingual babies.

A child learns a language fastest from birth to the age of three, and in the past people used to think teaching a child two languages at the same time would hamper the early learning process for both languages, said Prof Singh.

She added: "This study suggests parents trying to raise bilingual children shouldn't worry about that, and in fact we should be aware of the fact that it is beneficial to children."

Knowing this puts Summer's mother, Madam Audrey Wu, 38, at ease. The housewife had initially limited Summer's language exposure to English as she had read that teaching babies two languages concurrently would confuse them.

But seeing how Summer could not communicate with her grandparents, who speak Mandarin, Madam Wu decided to teach her the language as well.

"It's a relief to know this will not have any bad effects on her language development, but will in fact enhance it," said Madam Wu.

• Parents with children up to six years old interested in taking part in upcoming studies can e-mail infantlanguagecentre@nus.edu.sg