A Nanyang Junior College student who left one-third of his Chemistry Paper 3 blank is cheering the fact that his answer script was stolen and he ended up with an A.

Calling it a "blessing in disguise" , the student who spoke to The Straits Times yesterday said he ran out of time and left a third of the paper unanswered.

"I still got an A, even though I was expecting a B or C. However, God listened to my prayers and this incident happened, resulting in my distinction."

Another three students who spoke to The Straits Times were also happy with the As and Bs that they were awarded.

Nanyang JC student Zou Pei Pei, 19, who got a B, said the majority of her affected classmates did well and were not planning to resit the paper. "I believe the predicted marks were quite fair, and they took into account many things."

A Hwa Chong Institution (HCI) student who scored an A also felt he got a fair grade. "I thought basing it on the other three papers was fair. Besides, they checked it against students' preliminary results."

But a schoolmate of his was unhappy over the B grade she was awarded, and said she is considering resitting the paper. 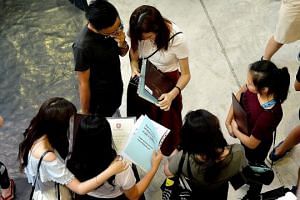 "I couldn't believe it when we were told of the incident. Anyway, I think I could have managed an A, that is why I am not happy with my B. It matters when you are applying for a highly competitive university course."

A HCI spokesman told The Straits Times that most of its affected students "would not be considering the re-examination", adding that "our focus is on rendering our fullest support to the affected students and parents to allay any concerns".

A mother of another affected student said the Education Ministry should look further into the incident to ensure such lapses do not happen again.

Said the housewife, whose son from Hwa Chong scored an A: "Luckily, my son got an A. If not, I would have asked for a review.

"This is not a small matter. It can affect a young person's chances of getting into the university or course they want to go into."