Nine of this year's 93 Public Service Commission (PSC) scholarship recipients are polytechnic graduates, not just the highest number yet, but also a big jump from recent years.

In the past two years, only a single scholarship went to someone from the polytechnics, while in 2016, the number was three.

In another record that suggests the diversity of scholarship holders is growing, recipients this year came from 17 schools. They include three from Singapore's newest junior college (JC), Eunoia, set up in 2017.

Minister for Trade and Industry Chan Chun Sing, who attended the award ceremony at Parkroyal on Beach Road hotel yesterday, highlighted the importance of a civil service that remains diverse, and urged the recipients to bring back a unique skill set after their studies.

PSC chairman Lee Tzu Yang said that the commission looks beyond "smarts" for qualities like integrity, dedication to service and excellence. "This year, we looked harder into more areas to seek potential talent. In addition to a wider range of schools, we worked with the polytechnics to encourage interest in a public service career."

The commission is looking to use game-based assessment to assess aptitude and personality traits. "By understanding the behaviour of candidates under different circumstances, we will be better able not just to understand individuals but also build teams... And we will continue to look for ways to widen the selection process." 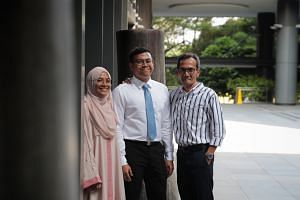 From sleeping in void decks to reading philosophy at Oxford

Mr Lee also highlighted that the PSC is promoting a wider range of countries of study, with eight scholarship recipients heading to China this year and three to France.

Also, 29 recipients have chosen to study locally - the highest number in a decade. Universities here are recognised as globally competitive in a growing range of disciplines, said Mr Lee. He added: "This will help develop networks of local peers and stakeholders for the future."

Mr Teo Chuan Kai, from Singapore Polytechnic (SP), is one of the 29. The 19-year-old received a PSC Scholarship (Engineering) to read information security at the National University of Singapore.

On why he chose SP over a JC, Mr Teo, who scored six points (L1R4) in the O levels, said: "The way the polytechnics presented their curriculum was far more interesting... They had modules like cryptography, for instance."

In his speech, Mr Chan warned against taking Singapore's place in the world for granted, saying the country may not be able to celebrate its 100th year with greater pride and confidence without hard work and continuing to be relevant.

He also urged scholarship recipients to see success not as how well they do for themselves, but how they enable the next generation to do even better.