Spirits were high despite the pouring rain as more than 12,000 alumni, staff and students of Hwa Chong Institution turned out in force to celebrate the school's 100th anniversary yesterday.

The date is also the school's Founders' Day, when it was started as The Chinese High School in 1919.

One of the many alumni who flew back from abroad especially to pay tribute to their alma mater at the centennial dinner was Dr Sim Choon Kiat. The 51-year-old is an associate professor of the sociology of education at Showa Women's University in Tokyo.

"I flew back because it is to return to where it all began for me and to catch up with old friends," he said. "I want to know that they are doing well and are healthy and happy."

Prime Minister Lee Hsien Loong was the guest of honour at the centennial gala dinner, together with Minister for Education Ong Ye Kung, Minister in the Prime Minister's Office Ng Chee Meng and Minister for Culture, Community and Youth Grace Fu.

Hwa Chong Institution, then known as The Chinese High School, began with 70 students in a small building in Niven Road in the Selegie area. Its notable alumni and former board members include businessman and philanthropist Lee Kong Chian and playwright Kuo Pao Kun. Music composer Liang Wern Fook was also an alumnus of Hwa Chong Junior College.

Dr Liang also composed a ballad specially for the centennial.

The centennial celebrations are centred on the message: "To strive ceaselessly for self-improvement; to serve virtuously for communal growth."

Mr Robson Lee, chairman of the board of directors, said: "Singapore is a multicultural and diverse country with various races and religions. The Government has worked hard for many years to provide a harmonious, prosperous and stable society. It has not been easy.

"So to the bicultural students of Hwa Chong, you must remember and be grateful for the support that the Government has provided the school."

He added that students should remember the motivations of their founders and serve Singapore well. 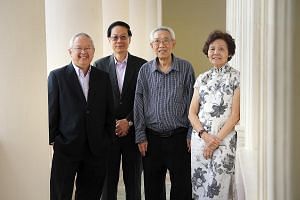 Together with the centennial, the school is also launching the Kuo Chuan Centennial Art Gallery Project. The gallery will house the works of pioneer artists who were Hwa Chong teachers such as Liu Kang, Chen Wen Hsi and Chen Chong Swee.

Dr Lim Wee Kiak, chairman of the board of governors, said: "It serves our younger generation to appreciate our local arts and heritage.

"As we celebrate... let us remember the lessons from history as they will inform our future legacy."

Hwa Chong's former principal Tooh Fee San, 79, said: "Its flourishing over this century... (is owing to) the collective effort of our board, staff, students, parents, alumni and partners in this journey."

Horticulturist Mak Chin On, 76, graduated more than 50 years ago, and a decade ago, he started preparing plants specially to decorate the school for its centennial celebrations.

Correction note: The article has been edited for accuracy.

A version of this article appeared in the print edition of The Straits Times on March 22, 2019, with the headline '12,000 alumni, staff and students get together for centenary'. Subscribe
Topics:
More
Whatsapp Linkedin FB Messenger Telegram Reddit WeChat Pinterest Print Purchase Article Copy permalink