SINGAPORE - From education campaigns to spot checks on recycling bins and refundable deposits for items such as glass bottles, suggestions on how to improve Singapore's dismal household recycling rate came fast and furious on Saturday morning (Sept 21).

Forty-eight people had gathered at the Ministry of the Environment and Water Resources (MEWR) premises for a citizens' workgroup aimed at getting ideas on how to improve the way households recycle.

Participants of the Recycle Right workgroup came from various backgrounds, and included those who do not recycle regularly.

One of the participants was Mr Leon Traazil, 42, a marketing director. He told The Straits Times that a targeted media campaign was needed to improve the domestic recycling rate.

"I think better communication and education on how to recycle right is needed," he added. "A campaign to reinforce this message on multiple platforms, even traditional means like fliers in letter boxes, can reach out to more people."

Singapore's domestic recycling rate has fared poorly over the years, hovering in the region of 20 per cent or so.

Last year, households here generated about two million tonnes of waste. Of this, only 22 per cent was recycled.

One key reason for the low rate is contamination. 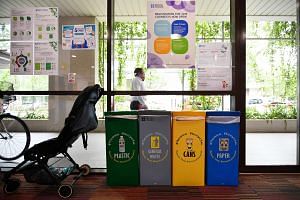 6 in 10 S'porean households recycle regularly, though misconceptions about the process remain: Surveys

Statistics from the National Environment Agency (NEA) show that 40 per cent of the items deposited inside the blue recycling bins do not get recycled because they are either non-recyclable items or are recyclables that have been soiled by food and liquid waste.

Participants at Saturday's event said the contamination could be due to convenience or ignorance.

For example, people may sometimes throw food or non-recyclable waste into the blue bins rather than look for a bin for general trash. Others may simply not know that some items, such as porcelain bowls or plush toys, cannot be recycled.

"Sometimes people may not recycle because they don't know whether their efforts matter. Others may throw food waste into the bin, or public waste collectors may mix recyclables with general trash, and these will compromise all their efforts," said marketing executive Zena Yong, 26.

To tackle this, the authorities can do spot checks on recycling bins, and if contamination is detected, paste a notice nearby highlighting the contamination, said Ms Cheong Kai Yan, a fresh graduate from the National University of Singapore.

"This would send the signal that someone is watching, and that people should take more effort to recycle right," said Ms Cheong, 23.

While suggestions to introduce incentives to encourage people to recycle more were also thrown up, participants said this could do more harm than good.

Said Mr Traazil: "Recycling should come naturally. If people are incentivised to do so, they may stop when the incentives stop."

The Recycle Right citizens' work group is the latest among a slew of governmental initiatives to reduce Singapore's growing mountain of trash.

In August, MEWR rolled out Singapore's first zero-waste masterplan. This highlighted a target of sending about one-third, or 30 per cent, less waste to the Semakau Landfill by 2030. This is to help the Republic's one and only offshore landfill last longer than the projected 2035.

Aiding this target, the Resource Sustainability Bill was passed in Parliament earlier this month. The new Act gives the authorities regulatory teeth to compel large waste producers to reuse and recycle more.

It will also pave the way for Singapore to squeeze more value out of every bit of waste. This could happen through turning incineration ash into construction material, extracting gold and precious metals from discarded electronics, and producing energy from food waste.

What it takes to be a zero-waste nation

Senior Minister of State for the Environment and Water Resources Amy Khor, who was at Saturday's event, said recycling is not just good for the environment, but could also benefit the economy.

Preliminary studies have estimated that a net benefit of $40 million could be reaped if Singapore recovers and reuses materials from electronic waste.

Said Dr Khor: "If we can improve the way we recycle, we can keep our finite resources in use for as long as possible. By turning trash into treasure, we can close our waste loop and move towards a circular economy approach to resource management."