For the first time, retiree Tu Yunxia used a machine yesterday to top up her ez-link card instead of handing cash to MRT service staff at the counter.

The 66-year-old's jitters were eased by service agents who were on hand to guide commuters like her in performing top-ups using the ticketing machines.

Yesterday marked the start of passenger service centres at 11 train stations no longer accepting cash top-ups, as part of the transition to a cashless public transport system by 2020. However, cash can still be used at the ticketing machines and ticket offices in the interim.

Madam Tu, who topped up her card in less than a minute at Hougang MRT station, said: "The good thing about the machine is that you don't have to queue as long (as compared to waiting for help at the passenger service centre)."

But she added that she was not ready to use her Nets card for top- ups, saying: "I am afraid the machine will 'eat' my card, but I guess when I have to, my children will teach me."

From next year, passenger service centres at all train stations will no longer offer cash top-ups.

nd by 2020, all ticketing machines at MRT stations will accept only cashless top-ups such as via Nets, and debit and credit cards, said the Land Transport Authority and TransitLink last month.

In the meantime, TransitLink has employed 150 service agents - of whom a quarter are senior citizens - to help with the transition. 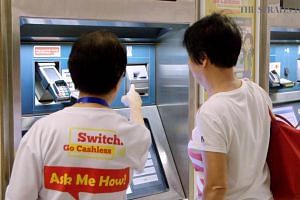 Since two weeks ago, they have been assisting commuters, especially the elderly and foreigners, with their top-ups.

A spokesman added that there will be at least one service agent at each station at any time. "We will monitor the ground situation and deploy more service agents if required, such as during peak hours or occasions when there is a surge of commuters," she said.

The Straits Times observed commuters topping up their ez-link cards at Hougang and Serangoon stations yesterday morning, which went by uneventfully.

Service agent Veronica Sim, 70, said most elderly passengers have accepted the change. "Only a few of them are unhappy, but we encourage them and say it's very simple. After they try, they also say it's quite easy," she said. She and other service agents also gave out tissue packs printed with instructions on using the machines, so commuters can refer to the steps on the go.

Deliveryman S.T. Khoo, 67, who has been using Nets to top up his ez-link card, said: "Singaporeans have been quite suaku with technology, but this is a good start." Suaku means "country bumpkin" in Hokkien.