Nets has advantage over rivals, but too soon to tell who will emerge winner as challenges remain, say analysts

In his National Day Rally speech on Aug 20, Prime Minister Lee Hsien Loong fired the starting gun for a race in which e-payment firms battle to be the one to unite fragmented platforms and reach all strata of society, including hawkers and heartland shops, where cash is king.

And after decades of hampering users with the hassle of multiple payment cards and apps, the e-payment sector seems to have wised up to this unwelcome reality. Mr Lee's call has triggered numerous proposals, Parliament heard on Monday.

Two new kids on the block - ride-hailing app firm Grab and Singaporean-founded tech firm Razer - have even gone public with intentions of being the bank-agnostic provider of a nationwide e-payment system.

E-payment stalwart Nets - which has had few innovations in recent years - is also picking up the pace.

On Wednesday, it announced plans to roll out the NetsPay mobile wallet, which can digitise the credit, debit and ATM cards of six banks - without encumbering users with the need to download multiple mobile apps.

Last Saturday, Nets also hooked up some 50 Tanjong Pagar Plaza hawker stalls with its QR (quick response) solution, allowing users of some bank apps to scan a QR code at the stalls to pay for their meals.

So which one will win the race? It may be too early to tell, but experts have identified a front runner.

Analysts believe that Nets has an advantage over contenders like Grab or Razer to be the ubiquitous, unifying e-payment network in Singapore.

For starters, it already has the scale and is willing to work with any financial institution or newcomer.

"Nets is very well positioned. It is the most popular payment network in Singapore with a large merchant and user base," said Mr Atul Garg, a 25-year banking veteran who is now the chief executive officer of a local fintech start-up SingX that provides online remittance services.

DBS has PayLah QR code installations at 1,000 hawker stores in Toa Payoh, Ang Mo Kio, Clementi and Bedok. But its system is not interoperable with other banks - unlike NetsPay and Nets QR code.

The three-decade-old Nets is an open network like the proposed GrabPay and RazerPay e-wallet systems. But Nets has a leg up as it is already in use by the majority of banks here, and there are more than 10 million ATM cards in use that support Nets.

It is owned by DBS, OCBC Bank and United Overseas Bank, and these banks' ATM cards are accepted by the Nets network. The ATM cards of foreign banks HSBC, Maybank and Standard Chartered Bank can also be used at the 100,000 retail points that accept Nets payments, which work by making direct deductions from people's bank accounts. 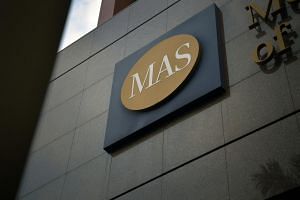 Despite Nets' leading position, it is not yet certain that it will win the race. No one has fully addressed the longstanding issues that have hampered the adoption of cashless payments here.

Firms implementing e-payment systems say that the biggest problem is getting hawkers and shopkeepers to use them. In the heartland, hawkers worry about attracting the unnecessary attention of the taxman.

"Policymakers may have to explore various ways to address such concerns for hawkers and neighbourhood shops to embrace cashless transactions," said Mr Desmond Tan, head of group lifestyle financing at OCBC Bank.

Tax amnesty is one way, said a source, who declined to be named.

The QR code - a complex barcode with black squares arranged on a white background that people scan with their phones - has emerged as a key feature of cashless systems. But it is not yet clear how the system will be managed in a fragmented market.

The Straits Times understands that several banks are lobbying the Monetary Authority of Singapore to appoint a neutral party like Nets to operate a common QR code (SGQR) framework, which is being developed by an industry task force.

If left to market forces, SGQR may become a white elephant, market observers believe. It is in the selfish interest of banks, payment networks and e-wallet providers to create closed-loop systems that can work with only their own apps.

Then there is the hurdle of settlement delays. Payments must be instant to convince merchants with cash-flow concerns to jump on the cashless bandwagon.

And here too, market observers say Nets has an edge, thanks to its acquisition of an interbank transfer system called Fast - currently the only instant settlement method here.

If Nets intends to be the winner in Singapore's cashless race, it should also act quickly to make Fast the de-facto method for settling all the cashless transactions it handles.

"Otherwise, it can be overtaken by nimbler rivals," said a source close to Nets.