These will be mailed to motorists on request; licence validity can be checked on SPF website

Motorists who want to drive overseas and need a physical driving licence can request it, said the Traffic Police (TP) in response to queries from The Straits Times on plans to stop issuing such licences by default.

The physical licence will then be mailed to the motorists, said the TP spokesman, adding that more details will be announced when ready.

"In the absence of physical driving licences, motorists who wish to check their licence validity may do so online through SPF's (the Singapore Police Force's) e-services website. This service is already available today," he added.

Plans to stop issuing physical driving licences by default were first revealed by Senior Parliamentary Secretary for Home Affairs Sun Xueling in Parliament on Monday, during the second reading of the Road Traffic (Amendment) Bill.

The Bill proposes to remove the requirement for motorists to surrender their physical licences if they do not have one.

On Monday, Ms Sun said that TP would no longer rely on physical licences to ascertain a motorist's driving qualifications. Instead, this information can be accessed using his NRIC and date of birth.

But motorists who wish to drive in certain other countries may need to hold a physical licence and an International Driving Permit.

The permit contains translations of the information on a person's driving licence into 10 languages, and is recognised in more than 150 countries. Motorists can apply for the permit from the Automobile Association of Singapore (AAS) for $20. 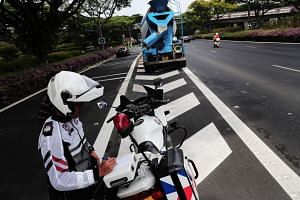 AAS chief executive Lee Wai Mun said it is "always good and useful to move away from the hard copy or physical card".

"A lot of membership associations, for example, have also begun issuing their cards in digital form. In the case of the driving licence, it is simply to identify what you can or cannot do," he added.

In the American state of Louisiana, residents can keep digital versions of their licences in their smartphones for US$5.99 (S$8.12). These can be used for police checks or to verify a person's age when buying alcohol or tobacco.

In New South Wales, Australia, trials are under way in parts of Sydney, Albury and Dubbo. Digital licences, which are stored in an app, will be rolled out statewide next month.