Probe into lift accident will take at least 2 weeks, says Tharman as he visits victim in hospital

SINGAPORE - There can be "no compromise" on lift safety, Deputy Prime Minister Tharman Shanmugaratnam said on Wednesday (Oct 14), as he revealed that the probe into an accident that severed an elderly woman's hand in Jurong last week would last at least a fortnight.

"Lifts are something that we depend on every day... We really don't want people to have to worry about their safety when taking the lift," Mr Tharman told reporters at the National University Hospital. He was there to visit Madam Khoo Bee Hua, whose left hand was severed by a lift in her Tah Ching Road block last Friday. 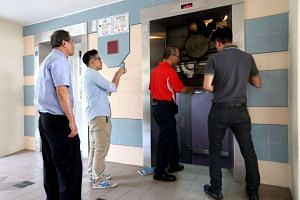 Making sure lifts are safe

Mr Tharman, who is an MP in her ward, spent an hour with her after flying in yesterday morning from an International Monetary Fund meeting in Peru.

He said of the incident: "We've to take responsibility. There's nothing to hide. There must have been something wrong with the lift, even if maintenance checks were done."

He called for safety standards in technical, engineering and maintenance works to be raised, as well as a "strong system of audit" to perform regular checks on lifts on top of the work done by maintenance contractors. "We need (a) culture of going for zero accidents... particularly when it comes to lifts."

Jurong Town Council general manager Ho Thian Poh said checks after the accident showed that the safety devices of all its lifts in the town were working.

Other town councils, including Marine Parade, Ang Mo Kio, West Coast, Chua Chu Kang and Tampines, have since stepped up checks on their lifts in the wake of the accident. At least one malfunction was discovered during Tampines Town Council's additional inspections.

Its chairman and MP for Tampines GRC, Mr Baey Yam Keng, said: "One lift had a faulty infrared sensor that has since been fixed.

"We know that some residents are anxious after the accident. Our assurance is that we are doing checks on top of the routine maintenance."

Mr Tharman said the probe to be conducted by the authorised examiner will be comprehensive. "He'll likely need at least two weeks because we want it to be a thorough job and not a quick checklist of sorts."

The man conducting the probe will be Mr Chan Chee Kong, a professional engineer from Nexco Enterprise, according to Jurong Town Council chairman David Ong.

"We will do all we can to assist (Madam Khoo and her family), be it their medical fees or other needs," Mr Ong added.

Mr Tharman called Madam Khoo the "archetypal pioneer". He has known her and her late husband, a former primary school principal, for 14 years through their work in the community.

"She's a remarkably strong person," said Mr Tharman, adding that she was "totally alert" during their meeting. "She had a long conversation with me going back many years just now, recounting lots of things in her life.

"She has a strong spirit, been through ups and downs in life, and is still determined to be independent. She still wants to do everything for herself - washing her clothes, cooking her food, walking her dog."

Taman Jurong Citizens' Consultative Committee chairman Goh Peng Tong, 62, described Madam Khoo as a friendly woman who has been a grassroots volunteer since 1989. He said she often organises activities like morning exercises and dinners for seniors in Taman Jurong.

"As a friend, I was very sad to see this happen to her. She's always smiling, always chatting with the other residents," said Mr Goh.

Madam Khoo's 59-year-old son, who gave his name only as Mr Lee, told The Straits Times that his mother is "progressing well" and there are no plans for further operations for now. "There were tears in her eyes when she saw (Mr Tharman)," he added.