While they welcomed the greater clarity in sentencing benchmarks for national service defaulters, lawyers and MPs said the door should not be closed on a defaulter's NS performance as a mitigating factor. The response comes after the High Court set new benchmarks for NS dodgers on Tuesday.

A three-judge panel rejected several key parts of the sentencing benchmarks laid out last year. Among the changes, the panel recommended a sentence close to the maximum of three years' jail for defaulters who return to Singapore after the age of 40.

Previously, the longer a defaulter stays away from Singapore, the lower his culpability.

The panel, led by Chief Justice Sundaresh Menon, also clarified that how well a serviceman performs should have no bearing in deciding his punishment.

Mr Vikram Nair, chairman of the Government Parliamentary Committee for Defence and Foreign Affairs, said that "while we would have sympathy for the defaulters who subsequently do well in service, NS performance should not be a mitigating factor as a general rule".

However, he conceded that a possible case might be made in which exceptional NS performance could be seen as evidence of remorse and, hence, taken as a mitigating factor. 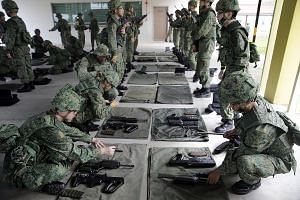 In one case, defaulter Vandana Kumar Chidambaram, 23, was initially fined $6,000 last year after receiving a discount for doing well in NS. But he was later given a seven-week jail sentence under the new guidelines.

Some lawyers agree that NS performance should generally not be a factor, but thought that the bar set for it to be considered - exceptional acts of valour like saving another soldier's life - is so high as to effectively close the option off for most people.

Lawyer Laurence Goh said the chances for servicemen in non-combat roles, like clerks, to demonstrate exceptional acts of valour were also likely to be remote. He added that even though the harm has already been done when a defaulter fails to turn up for NS, not allowing NS performance to count as a mitigating factor would be a "double jeopardy".

"There should be consistency between the military and civilian courts, since commander testimonials are commonly used to ask for a reduced sentence in court martial cases, such as AWOL (absent without official leave) and disgraceful conduct," said Mr Goh. He handled about 10 Singapore Armed Forces (SAF) court martial cases last year.

On whether NS performance would encourage potential defaulters to abuse the system by allowing them to serve at a time of their choosing, Mr Ashwin Ganapathy, a lawyer at IRB Law, said this is unlikely as there should not be a blanket discount based on how well a person performs when serving NS.

"But if we go by the logic that good performance does not reduce the harm caused by the defaulter's offence, then this seems inconsistent with any other case where merit would normally be given to offenders who do certain acts to show that they are remorseful," he added.

Hilborne Law managing director Rajan Supramaniam, who has worked on about 10 defaulter cases in his 17 years of practice, agreed. "Some weighting should be given, on a case-by-case basis," said Mr Rajan, who noted that in his last three to four default cases, the defendants had tried to use NS performance as a mitigating factor.

Mr Nair said the new benchmarks give a lot of certainty and makes it clear what a duty to NS entails: "That you have to do it when you are called upon, not at a time of your own choosing."

Mr Christopher de Souza, chairman of the Government Parliamentary Committee for Home Affairs and Law, said running the SAF or Home Team is "not a social experiment". "Singapore's survival depends on both being operational. Therefore, those who are liable must step up to serve. If they don't, they do harm to Singapore's defence machinery," he said.

"Whether the defaulters have benefited from Singapore citizenship or not is completely irrelevant."