SINGAPORE - Barely a month after it suffered shocking abuse at the hands of its owner, a dog is now happily settled into its new home.

The Society for the Prevention of Cruelty to Animals (SPCA) said in a Facebook post on Wednesday (Nov 25) afternoon that Pumpkin the Japanese Spitz had been adopted by a Ms Gourie.

"We wish her many happy years with her new family," the post added. It was uploaded along with a photo of Pumpkin with Ms Gourie and a young boy.

According to SPCA's deputy executive director Selina Sebastian, Pumpkin - its name was Halloween-inspired - was placed for adoption on the SPCA website on Monday.

A suitable home was found for it the following day, said Ms Sebastian, as there was "strong interest" from the public given her breed and the nature of the case.

"Applications are on a first-come basis and as with any animal at our shelter, potential adopters have to go through an adoption screening process to ensure they are ready for a life-time commitment," she added.

"For those who did not get to adopt Pumpkin, we would like to encourage them to consider the many wonderful adoptable dogs (and cats) awaiting homes at our shelter."

The plight of the dog first came to light when citizen journalism Stomp put up a video on Oct 31, which showed Pumpkin being spun and swung in mid-air by its male owner.

It was six months old then. 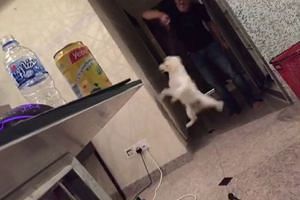 Six-month-old dog swung in mid-air by owner to be put up for adoption: SPCA

Alerted to the video, SPCA acted swiftly and enlisted the help of the police to rescue Pumpkin from its previous owner's home.

He subsequently surrendered ownership of Pumpkin on Nov 2.

The Agri-Food and Veterinary Authority of Singapore (AVA) is still investigating the case.

Under the revised Animal and Birds Act, anyone found guilty of cruelty to animals, including abandonment of any animal, can be jailed for at least 18 months and/or fined up to $15,000.