It is 6.30pm on Wednesday and Dr Goh Wei Leong has just seen the last of his patients at Manhattan Medical Centre, the general health clinic he has been operating in Chinatown for the last three decades.

It has been a long day but the lanky 1.82m man chirpily surveys the day's Chinese New Year offerings from his patients: Mandarin oranges, tubs of homemade cookies and several boxes of kuih ambon, a honeycomb cake from Indonesia.

A nurse, one of several who have been in his employ for more than 20 years, comes in bearing two pieces of homemade carrot cake with cream cheese frosting. He helps himself to one with gusto.

"This is also from a patient," he says with a grin.

He breaks into a sheepish smile, his eyes crinkling, when asked if being crowned The Straits Times Singaporean Of The Year the day before has created excitement among his patients.

"Only four or five of them knew. Many of them are Chinese-educated and don't read the English papers," says the congenial doctor who beat nine other finalists to the title.

Organised by The Straits Times and sponsored by UBS Singapore, the award honours outstanding Singaporeans who have overcome great challenges, put the country on the world map or made it a better place through acts of selflessness.

Infectiously amiable and chatty, the eldest of four children of an army officer and a teacher says kindness and generosity were values treasured by the family. That's because they have experienced big-heartedness in life-changing ways.

During the Japanese Occupation, his mother, then barely in her teens, worked in a factory and was personal assistant to a Japanese officer. One day, he asked to see her father.

"He told my grandfather: 'Tomorrow, if you're asked to go for a job, do not go no matter what,'" says Dr Goh, adding that the family found out later that those who went were executed.

His maternal family also benefited from the generosity of a wealthy businessman who let them live for years in one of his two garages.

"And when my mother got married, he let her live, rent-free, in one of his houses for five years so that she and my father could save up to buy a house," he says. "My mother imbibed that generous spirit, she always had problem kids in our home when I was growing up."

After completing his primary education at Haig Boys' where he was one of its top students, he went to Raffles Institution.

Although the design-loving teen toyed with the idea of studying architecture, he settled on medicine at the National University of Singapore instead. Unlike most of his classmates, he set his sights on becoming a general practitioner.

"When I told my classmates I wanted to be a GP, they asked me if I had failed my exams. The thinking was you became a GP only if you couldn't make it," he says.

"But I know myself. I'm a generalist. I'm not into detail, I'm creative and a big picture guy,"

Upon graduation in 1988, he joined a medical group. He didn't like the working environment so four months later, when he learnt that a Chin Swee Road clinic was available for a takeover, he bit the bullet.

"I'd never thought of opening my own clinic; I like to work for people but ha ha, there was a push factor," he says with a grin.

With whatever little savings he had and help from his parents, he took over Manhattan Medical Centre. Three decades later, he is still there.

Just a stone's throw from People's Park and Chinatown and across the road from York Hill, where there are several blocks of one-room rental flats, the area is colourful and its denizens, a motley lot.

"I love it. I got to know a whole different group of people here," says Dr Goh, who once made a house call to a flat nearby only to find five old men puffing away on a bed. It was an opium den.

All was well but after a difficult relationship which lasted about three years, he "lost the plot" for a while. 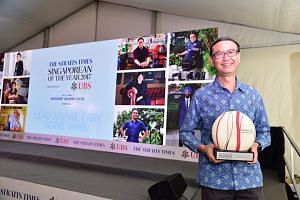 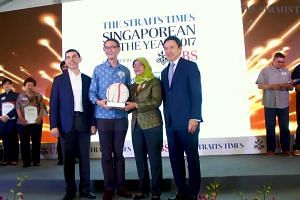 ST Singaporean of the Year: A celebration of difference, oneness and what is possible

He bought himself a second-hand Maserati, got himself a membership at the Singapore Island Country Club (SICC) and lived the good life.

His life changed, however, when he joined a friend on a humanitarian trip to Mongolia in 1995.

"It was just a couple of years after the Soviets left. It was freezing cold in spring, shelves in shops were empty, life was tough. I realised there was a different world and life out there. It was a shift for me," he says.

He started going to India, making up to four humanitarian trips a year and soon built up a solid network of contacts with non-governmental organisations (NGOs).

It didn't take long before he sold off his SICC membership.

"There was a disconnect. I had found far more interesting things to do by then."

Things took another turn in 1999 when he went to the Indian state of Odisha (formerly known as Orissa) after a Super Cyclone, with a wind speed of 300kmh, struck in October and left nearly 20,000 people dead.

"I saw people who were alive but whose faces were dead. I had to amputate, without anaesthetic, the broken and dangling finger of a little boy. I saw utter destruction and the images still haunt me. People who had nothing had even less," he says, adding that what he did in that one week was meagre in the light of the scale of destruction and misery he saw.

Dr Goh describes the experience as one of the "building blocks in the story of my own life".

With what he had learnt and the network he had cultivated, he helped to coordinate disaster relief trips to north-western Turkey when it was rocked by a massive earthquake a month later, and to Indonesia after the 2004 Indian Ocean tsunami hit, killing more than 250,000 people in 14 countries.

"I connected Red Cross, World Vision and other agencies with personnel because I have a database of doctors and nurses," he says.

In 2006, he was introduced to businessman Tang Shin Yong, who was also active in NGO and voluntary work. The two hit it off and would meet regularly for coffee to talk about Singapore's changing landscape, poverty and other social issues.

"One day, I asked him: 'Don't you think there are now many migrant workers in Singapore?' I said migration was a big issue and as a doctor, I felt there was a need to serve this community," he says.

It helped that he was already volunteering at a clinic in Little India run by his friend, Dr Simon Mahendran. Mr Tang agreed with him. The idea for HealthServe was born.

To test the waters, Dr Goh invited 15 of his friends for dinner and asked them what they thought of his plan. All said he should launch it.

Together with Mr Tang and a few friends, he opened a bank account, found a place for a clinic in Geylang Lorong 23 and opened it on Saturday afternoons, charging just $5 per consultation. Finding volunteer doctors did not prove difficult.

To their dismay, however, the patient traffic that they expected did not materialise.

They regrouped and decided to cross the street to the even-numbered lanes in Geylang where sex workers ply their trade and many migrant workers live above brothels.

"By crossing the street, we crossed over to the side of the vulnerable and oppressed," he says.

He made the acquaintance of a pimp, who introduced him to many of the migrant workers.

"We spent many evenings talking to them, telling them about the clinic. And after that, they started coming. It was a major lesson for us; we had to move into the community," he says.

To keep things going, he initially relied on the generosity of friends.

"There was a standing joke among my friends. They'd say: 'Don't go out for lunch with Wei Leong. He will ask you for money,'" he says with a laugh.

But as word of their good work spread, organisations like the Lee Foundation stepped in with grants and donations.

In 2010, he threw a big party to celebrate his 50th birthday. Instead of gifts, guests were asked to pledge money - $140,000 was raised - to seven charities he was associated with, including HealthServe.

Dr Goh and his friends soon realised that many of their patients had more than just medical problems. Many were depressed and lumbered with problems brought on by unscrupulous agents and employers; some even had no money to eat.

A couple of years after its inception, HealthServe started to offer social support and legal advice.

"A full-time counsellor joined us. Then we got in lawyers, and also started offering free meals and MRT top-ups," says Dr Goh, adding that he learnt a lot from other migrant worker organisations, including Home and TWC2.

Many migrant workers it has helped have become volunteers. Some grateful ones have even donated part of their workmen's compensation to the organisation so that it could continue doing what it does.

Meanwhile, co-founder Mr Tang left the organisation three years ago. "He said he'd been a volunteer executive director for seven years and that if he didn't leave, HealthServe would not grow. He and I spent a year looking for a paid executive director," says Dr Goh, adding that he, too, plans to exit the organisation one day so that it can scale even greater heights.

"I hope to go into more mentoring and coaching. I want to create more inclusive spaces."

The self-described "fulfilled single" is currently brainstorming with his volunteers and interns how best to use the $20,000 prize money he won as Singaporean Of The Year.