Matching actual faces to outdated photos can be tough, hence the new rule on renewing ICs

On Mr Lee Kiah Foo's National Registration Identity Card (NRIC) is a photo of a young man with an angular face and thick floppy hair.

But in person, Mr Lee has a plump face and a crew cut, speckled with silver hair. "I often get asked, 'Are you sure that is you?'," the coffee-shop owner laughed.

Such disparities have prompted the Immigration and Checkpoints Authority (ICA) to make it compulsory to apply for a new card at 55 years old, starting from next year. Mr Lee will be among the first batch of Singapore citizens and permanent residents (PRs) to be affected by the change.

The new rule aims to reduce the security risks associated with the authorities not being able to correctly identify an individual. It will also allow better identification of older NRIC holders, who currently have cards with photos taken over 20 years ago, and prevent "possible inconvenience".

"People are sure to look different as they age so it makes sense to change the photo," said Mr Lee. 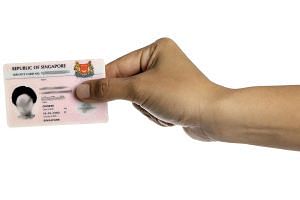 Mr Krishna Jayaram, 69, a part-time property agent, said: ''If the photo on the NRIC is more current, then there will be less need for the authorities to scrutinise the owner.'' His NRIC photo shows a much younger picture of himself with a full head of black hair, which today has turned grey and receded.

They were among 10 people The Sunday Times spoke to,who agreed with the rationale behind the ICA's decision, though they had never been denied services because of their outdated photos.

''It could be because my facial features have not changed much with age,'' said Mr Krishna.

One issue that has been brought upon line is the cost of applying for a new NRIC. The re-registration will cost $10 for citizens and $50 for PRs. ''If it is compulsory, then I feel that the Government should waive the cost,'' said Mr Krishna, echoing the online sentiment.

From 2018, Singapore citizens and PRs born before 1962, will also have the option of re-registering for a new NRIC, though it will not be compulsory. Food-stall owner Rabiah Md Yasin, 57, will probably choose not to: ''You need to take a new photo, make an appointment, and also queue. It takes a lot of your time.''

"Last time, I didn't have to wear glasses. Now I am long-sighted, so I cannot see things at close quarters." Mr Lim The Wang was 37 and working as a shoe-store manager at Thomson Plaza, then better known as Thomson Yaohan, when he took his NRIC photo in 1992.

The now-defunct supermarket chain was then attracting throngs of customers. "It was very crowded and also full of families," said Mr Lim, now 61, who also goes by the name Tony now.

Today, the grandfather of two is a director at family business Pest Solutions Singapore.

Where did all the hair go?

"Just look at my hair, it used to be so long and thick. Now it's so short and getting thinner." Life has not changed much for Mr Lee Kiah Foo, 54, since his NRIC photo was taken 23 years ago.

Mr Lee, who is known to friends as Kenneth, was and still is an owner of a coffee shop in Toa Payoh, a business he took over from his father.

He said that 1993 is a special year for him, because that was when his daughter was born.

"She was my first child and I will never forget the first time I saw her and the excitement I felt," said Mr Lee, who now has two sons as well.

Another shot at a better shot

"I don't like my photo, I look ugly in it. I think I look better now."

She joked that she would be happy to change her NRIC if it meant having a prettier photo.

"My hair is much greyer and my skin seems more saggy compared to before. That's only the facial part. If you go lower, then I will say I also have a bigger belly."

Mr Krishna Jayaram, 69, who is now a part-time property agent, was an investor in the property market when his NRIC photo was taken in 1991.

He feels his features have not changed much overall, but Singapore has.

"Prices have gone up. Compare having coffee for 50 cents then to $1.30 today," said the grandfather of two.

Thicker hair and smoother skin then

"I was much younger. My hair was longer and thicker and my skin was also smoother." When her NRIC photo was taken in 1994, Madam Rabiah Md Yasin had just given birth to her fifth and youngest child, a girl, at 36 years old.

She ran a food business with her husband and more than 20 workers, and had stalls in several canteens and coffee shops.

She gave up the business after her husband died seven years ago, but staying home proved too stressful financially.

Today, the 57-year-old runs a Malay food stall at a coffee shop in Toa Payoh using her mother's recipes.

A version of this article appeared in the print edition of The Sunday Times on November 20, 2016, with the headline 'Do you see what IC?'. Subscribe
Topics:
More
Whatsapp Linkedin FB Messenger Telegram Reddit WeChat Pinterest Print Purchase Article Copy permalink