The prosecution has called for a lengthy jail term and a fine for the former Ang Mo Kio Town Council (AMKTC) general manager who pleaded guilty to corruption in March this year.

Stressing the need for a "stiff deterrent sentence", Deputy Public Prosecutor Jiang Ke-Yue yesterday called for a jail term of at least four years and eight months for Wong Chee Meng, 59, along with a penalty of $23,400.

Wong received over $86,000 in bribes between 2014 and 2016 from Chia Sin Lan, 63, the director of two construction companies that submitted bids for town council contracts.

The prosecution also sought a jail term of at least four years and two months for Chia, along with a $100,000 fine for each of his two companies, 19-ANC Enterprise and 19-NS2 Enterprise.

They will be back in court for sentencing on Aug 23.

"This is because of the propensity to erode the belief and trust in town councils, public institutions which are entrusted by Parliament to administer public funds in an accountable manner," he said. 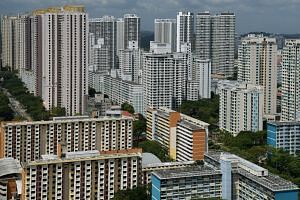 He said the power of a town council to award works to contractors has to be exercised according to established processes and procedures under the Town Council Act.

Only then can it be ensured that the public funds held by town councils are properly administered.

"Given the sheer size of resources managed by town councils and the extent to which town councils impact upon the private lives of a majority of Singaporeans, absolute probity is demanded of all officers and employees of town councils."

From 2014 to 2016, Wong was treated to KTV sessions - including alcoholic drinks, tips for staff and flower garlands for lounge singers - by Chia, and also received bribes such as a $13,500 discount on a used car and financial transfers totalling close to $27,800 to his mistress in China.

According to court documents, Wong, who worked for CPG Facilities Management, which was AMKTC's managing agent, had become "beholden" to Chia. In that period, 19-ANC and 19-NS2 were awarded tenders and contracts by AMKTC worth $9,874,650.

In mitigation, Wong's lawyer Melanie Ho said that her client has had an "exemplary career and public service record" of more than three decades. She added that this was Wong's first brush with the law and the offences were a one-off indiscretion due to difficulties in his personal life.

Wong also never compromised his duty to the town council, which did not suffer any harm, said Ms Ho.

Responding to the prosecution's argument that the case caused an "erosion of trust of the institution of town councils", Ms Ho called it "an exaggeration of the facts".

She argued that Wong was fundamentally a private sector employee who was deemed to be a public servant. She also said the main issue was the blurring of lines in Wong and Chia's personal lives and their work, with the two business associates becoming close friends.