A dentist serving a 15-month suspension dealt out by the Singapore Dental Council (SDC) has been suspended an additional 15 months for further professional misconduct.

This is the third time in four years that Dr Sng Wee Hock of WH Dental Surgeons, which has clinics in Hougang, Punggol and Seletar, has run afoul of the dental professional watchdog.

Dr Sng was the approved supervisor for two Australian-trained dentists who are here under conditional registration. Instead of having them working in the same clinic with him, he had them working in different clinics. This came to light when one of the clinic's former employees made a complaint to the SDC, the dental professional watchdog, that the two dentists under conditional registration were in fact working without supervision.

The SDC's disciplinary committee decided to impose the maximum fine of $50,000 on Dr Sng because his action was "driven by profits", and also because of his previous convictions.

The prosecution had also asked for a 20- to 24-month suspension for Dr Sng. Such serious breaches of supervision were "prevalent enough" that the SDC had to issue several circulars on the need for proper supervision at all times.

The disciplinary committee decided to suspend Dr Sng for 15 months for one case and four months for the other.

The suspensions run concurrently. However, the SDC made it clear that the 15-month suspension will start only after the suspension he is now serving is completed.

The SDC's disciplinary committee decided to impose the maximum fine of $50,000 on Dr Sng because his action was "driven by profits", and also because of his previous convictions.

Dr Sng was also made to pay 90 per cent of the SDC disciplinary proceedings cost for his latest transgression. The remaining 10 per cent will be paid by the two dentists he was supervising.

Last year, Dr Sng was fined $40,000 and suspended for 15 months for letting "unqualified dental assistants" do orthodontic treatments and procedures on patients.

In 2013, he had been fined $15,000 when he wrongly told a patient her entire dental cost could be claimed from Medisave.

The two dentists Dr Sng was supervising have also been penalised. Dr Jun Soo Lee had done about 100 clinic sessions treating patients on his own over a period of seven months, from October 2014 to May 2015. He has been suspended for three months, fined $8,000 and has to pay 8 per cent of the cost of the proceedings.

The other dentist, Dr Park Seunghyun, had worked unsupervised for three weeks in 2015. He has also been suspended for three months, fined $2,000 and has to pay 2 per cent of the cost of the proceedings.

The disciplinary committee said Dr Lee and Dr Park's offences were not serious enough for their conditional registration to be cancelled. 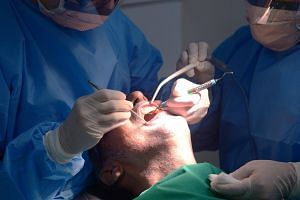 The Straits Times understands that both dentists, still on conditional registration, are now working at other clinics with different supervisors.

A version of this article appeared in the print edition of The Straits Times on September 19, 2017, with the headline 'Dentist on suspension gets another ban for misconduct'. Subscribe
Topics:
More
Whatsapp Linkedin FB Messenger Telegram Reddit WeChat Pinterest Print Purchase Article Copy permalink