SINGAPORE - A new legal framework that can grant companies amnesty for certain corporate offences is being proposed in Singapore.

Deferred prosecution agreements (DPAs) could be offered to corporations as long as they comply with specific requirements, Minister for Home Affairs and Law K. Shanmugam announced on Monday (Jan 15) during a dialogue with lawyers.

The framework is one of several proposed amendments to the Criminal Procedure Code and Evidence Act.

"It's about time we had DPAs here where corporates can be taken to task and (where) they could pay a much higher sum compared to what the criminal law provides," said Mr Shanmugam at the Modernising Criminal Justice: New Developments in Criminal Procedure dialogue.

Under the proposed DPA framework, the public prosecutor can agree to dismiss the charges a company faces providing it agrees to undertake strict obligations.

DPAs are already in effect in Britain and the United States. The framework only applies to companies and is separate from prosecution against individuals.

All DPAs will need to be approved by the High Court which must be satisfied that the agreement is in the interests of justice and that the terms are fair, reasonable and proportionate.

The mechanism will allow for corporate reform, said Mr Shanmugam. DPAs must also be published after the court approves them. 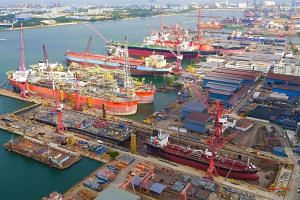 The announcement for the proposed legal tool follows an international corruption probe involving Keppel Corporation's offshore and marine unit. Keppel had entered a DPA in the United States.

The DPA framework was brought up during the public consultation for proposed amendments late last year, according to Law Society president Gregory Vijayendran.

Speaking on the sidelines of the dialogue, Mr Vijayendran said the framework is "not a case of going light on corporations". He said it is a forward-looking approach for Singapore's open economy.

"There is obviously going to be a focus on the many corporations who set up in Singapore who want to be able to carry on business and put a bad episode behind them," he said.

"It does allow a very practical avenue for which there can be discussion for some protection in place for the public because the High Court is still going to scrutinise the matter. It allows for a practical resolution."

Mr Vijayendran said that "a number of offences on our statute books" will apply in cases of corporate crimes.

"I see this as a move to be welcomed by the business community. Time will tell of course."

On Monday, more than 70 criminal law practitioners attended the dialogue at The Arts House where Mr Shanmugam addressed feedback from the public consultation.

Last July, the Law Ministry announced 50 proposed changes to the Criminal Procedure Code and the Evidence Act. The proposed amendments were put up for a month-long public consultation last year and are expected to be tabled in Parliament this year.

Mr Shanmugam highlighted the "strong request" by lawyers to extend community sentencing. The amendments, if passed, will allow more offenders to benefit from rehabilitative opportunities as the eligibility criteria will be expanded in a "controlled manner".

Offenders who serve short jail sentences or have gone through Reformative Training will also be eligible.

The ministry is also working on taking video-recorded statements from vulnerable victims, such as those of serious sexual offences.

Citing the experiences of other jurisdictions, Mr Shanmugam said: "In sexual assault cases, a lot of the evidence suggests that the first statement that the victim makes is usually the most accurate."

The recording can reduce the trauma felt by the victim by minimising the need for them to repeatedly recount their ordeal and be used in place of oral evidence at trials. It will be implemented in later phases.

Mr Shanmugam said that defence counsel will be given "good access" to these video interviews.