The allegation that the Workers' Party-run Aljunied-Hougang Town Council (AHTC) spent more by engaging a new managing agent in 2011, instead of retaining its existing one, was challenged in the High Court yesterday.

Senior Counsel Chelva Rajah argued that the assumption behind this claim - made by KPMG auditors in 2016 - was that the incumbent agent of Aljunied Town Council, CPG Facilities Management, would be willing to take on the running of Hougang constituency as well.

CPG was not bound to do so, said Mr Rajah, who is defending three WP MPs and two town councillors in a multimillion-dollar lawsuit over an alleged breach of fiduciary duties.

The civil case centres on $33.7 million in payments that AHTC made from 2011 to 2015 to FM Solutions & Services (FMSS) and its service provider, which are alleged to be improper and void.

The appointment of FMSS in July 2011 came after the Workers' Party (WP) won Aljunied GRC in the May 2011 elections and planned to merge the running of the two town councils, with a single agent in charge.

A report published by KPMG in October 2016 noted that AHTC's appointment of FMSS, instead of keeping CPG, resulted in additional costs of over $515,700. This was for AHTC's first managing agent contract, which the town council had decided to waive a tender for.

But Mr Rajah said that CPG, which had been appointed by the People's Action Party-run Aljunied Town Council, would have been an "unwilling horse". 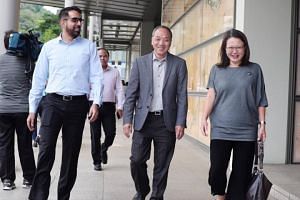 Mr Rajah said that based on CPG's contract with the town council, a variation of more than 10 per cent in fees would require both parties to reach a mutual agreement, for CPG to take in Hougang division.

For this reason, it was not possible for WP chairman Sylvia Lim to instruct CPG to take on Hougang constituency, Mr Rajah said.

But KPMG executive director Owen Hawkes, who was being cross-examined by Mr Rajah, disagreed. Based on his understanding, Mr Hawkes said, CPG was contractually obliged to absorb Hougang Town Council if directed to, and AHTC could have retained it for a year while calling a tender for a new managing agent.

Earlier yesterday, Mr Rajah also argued that an invoice of more than $106,000 paid to FMSS was not improper.

Part of it went to reimburse salaries for Hougang Town Council staff for the first two weeks of June 2011, he disclosed.

The KPMG team had in 2016 pointed out that the letter of intent from FMSS said only that it would take over the salaries and appointment of Hougang Town Council's staff from June 15, 2011.

They said that this fact should have been included in the pleadings, with the related documents disclosed. Mr Singh asked who gave FMSS the authority to make the salary payments, adding that there was "a complete lack of control and systems of checks and balances". Justice Kannan Ramesh agreed that the new information should be put into the pleadings, and Mr Rajah said that he would amend them.