The authorities reiterated yesterday that the Sungei Road flea market will not be relocated, even as a new group is petitioning to get the issue heard again in Parliament.

In one-on-one engagements with some 200 vendors conducted at the market last week, a sizeable number of vendors had indicated they were interested in taking up lock-up stalls at hawker centres, or continuing their trade in places such as temporary flea markets.

Some said they would like to apply for either employment or financial assistance, or both, if they cannot continue their trade.

A statement, issued jointly by the National Environment Agency, Ministry of National Development, Ministry of Social and Family Development, Workforce Singapore, National Heritage Board and Singapore Police Force, said: "The respective agencies will be following up closely with these users individually to engage them further on the various options that they had expressed interest in."

It added, categorically, that the market will not be relocated.

The Sungei market vendors have no wish to stand in the way of redevelopment. The question is, have we considered redeveloping to include this one-of-a-kind market, given the fact that many parts of Singapore are designated as mixed-use developments?

COMMUNITY-BASED ARTIST TAN BIYUN, who believes the free-hawking zone should be retained. 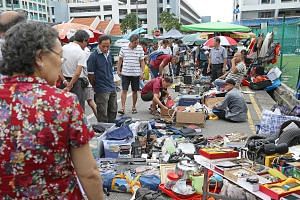 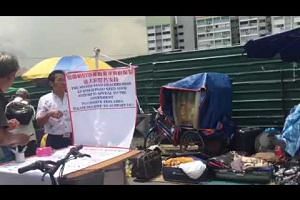 This reinforced the message delivered by Environment and Water Resources Minister Masagos Zulkifli in Parliament earlier this month that the authorities "have engaged enough" with vendors and that to meet them again is tantamount to promising that the Government's stance will change and that redevelopment will not start.

The minister had said: "There are alternatives. But, should we put up another site like this which is deemed to be like Sungei Road but not in Sungei Road? I don't think this is something we want to dwell (on) further."

The decades-old Sungei Road market will be making way for future residential developments. Its last day of operations will be on July 10.

Despite the repeated assertions that the decision is final, the president of the Association for the Recycling of Second Hand Goods, Mr Koh Ah Koon, 76, believes that there is a "glimmer of hope" since Singaporeans have stepped forward to help the market.

The petition by Save Sungei Road Market aims to gather 1,000 signatures for the cause.

The one-page letter asks the Government to designate an alternative site for the market, hold a dialogue "empathetically, genuinely and comprehensively" with vendors to understand their needs, as well as to help the vendors to continue making a living "in a dignified manner that takes into account their experience and abilities".

The group's Facebook page, which was set up in late March, has had more than 500 likes. Its 20 core members come from the arts, academia, heritage, IT and public relations sectors.

One of them, community-based artist Tan Biyun, told The Straits Times she believes the free-hawking zone should be retained.

She said: "The Sungei market vendors have no wish to stand in the way of redevelopment. The question is, have we considered redeveloping to include this one-of-a-kind market, given the fact that many parts of Singapore are designated as mixed-use developments?"

The group is seeking the help of an MP sympathetic to the cause to submit its petition to Parliament.

A parliamentary petition is a formal request by the people for the House to consider a certain issue. It is guaranteed to make its way to the nation's highest lawmaking body, so long as it has at least one signature and is submitted by a Member of Parliament.

Ms Tan added that the group believes in the cause.

"This group wants to journey with the vendors to the point where our campaign goals are met or the issues are resolved satisfactorily."

In Parliament, Mr Masagos had said five of the 11 original permit- holders at the Sungei Road flea market have indicated interest in operating stalls at Golden Mile Food Centre and Chinatown Market.

All 11 were given the option of renting stalls at subsidised rates after the market's last day.