New research shows how psychological burden traps them in poverty, points to benefits of extending aid at earlier stage

While some may assume that poverty is the result of laziness, a lack of self-control or irresponsibility, a new study has found that chronic debt actually hurts the poor person's ability to think clearly and make good decisions.

Single mother Fatimah Asmandi knows this well. She borrowed $3,000 from a friend to help her former husband - who is now in jail for drug offences - to pay the lawyer's fees. Although the mother of four children, aged seven to 16, was struggling financially herself, she did not consider the interest that her friend demanded for the loan.

The debt eventually snowballed to $5,000, a princely sum for the 45-year-old who was then working part-time in a library earning about $600 a month. She also had unpaid telephone and utility bills, and housing arrears of close to $1,000.

Dr Ong Qiyan, deputy director of the Social Service Research Centre at the National University of Singapore (NUS), said of the study: "Debt burdens the poor psychologically; it creates severe anxiety and it harms their ability to make good decisions. This may be why we observe them making decisions that seem harmful for themselves."

The researchers sought to find out how chronic debt, which is common among the poor, keeps them trapped in poverty. Published in the Proceedings Of The National Academy of Sciences on Monday, the researchers learnt that having multiple debts weighs heavily on a person's mind. This is especially so for the poor, as they often live hand to mouth while trying to pay bills so that the electricity supply or telephone line, for example, is not cut off due to arrears.

"This saps their mental energy, leaving them with less remaining brain power to stay focused, resist temptations and think clearly when they have to make important decisions," said Dr Ong.

"If we are worrying about managing debt and calculating what we can afford this month and what we have to give up, we have less brain power for our job, for improving ourselves or to help our children with their studies."

Dr Ong pointed out that emerging research in the field has found poverty reduces one's ability to make good decisions and that it hinders them from succeeding in life.

"Even if you have the same merit ability as others, you will face more difficulties in achieving your potential. Being poor may make you more likely to turn down a training opportunity, avoid acquiring new skills or trying new innovations - all because there is too much on your mind," added Dr Ong.

The study was done in collaboration with Methodist Welfare Services (MWS), which had embarked on its own Getting Out Of Debt (Good) programme in 2015. Between January and August 2015, the charity paid off debts of up to $5,000 per eligible family. 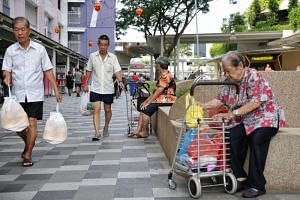 Social workers suggest ways to lift children out of poverty

In the study, the researchers surveyed 196 people on the Good programme. In terms of household income, the respondents were from the bottom 10 per cent, with an average monthly household income of $1,788. Most were facing multiple debts. The debt size was on average about three or four months of their salaries.

To measure decision-making capabilities, the respondents were asked questions that measured their preferences in making decisions, involving risk and patience that are widely used in economics and psychology research, Dr Ong said.

The study comes at a time when the widening income inequality and declining social mobility have dominated the national discourse in the past year and the Government has signalled its commitment to tackling these issues.

The researchers noted that while much help is given to the poor, the aid schemes demand that the poor exhaust their finances first or show proof that they are really in financial trouble before they can receive help.

But the team pointed out that it is more fruitful to extend aid to the poor at an earlier stage so they do not fall into chronic debt.

Dr Ong explained: "If we spend the money earlier, their ability to make good decisions will still be relatively intact and the same amount of money might allow them to get out of trouble for good."

Ms Fatimah said the mounting debts weighed heavily on her mind and she struggled to find a way out.

"I was so stressed as I was also going through a divorce and I had to take care of my children."

Thankfully, she received help from MWS' Good programme, which paid off her housing, utilities and telephone arrears. She also found a better paying job and now earns $1,200 a month, before overtime claims, at Changi Airport.

Today, life is better and she has $5,000 saved up. It was made possible through the MWS Family Development programme, which is a debt clearance and savings matching scheme. For every dollar she put into her savings, the charity matches it with $2.

Ms Fatimah said: "Once I saw my debts being cleared, I became more relaxed... I can also think better of what to do for my future."