SINGAPORE - The best way to prevent food allergies is to know which foods cause signs and symptoms and avoid them.

According to the Health Hub website, which is contributed by the Health Promotion Board, people with food allergies should read food labels for ingredients.

When dining out, they should also ask the establishments for information on the ingredients in their food. They can also carry emergency epinephrine - a drug used for treating severe allergic reactions.

Prof Thibault from the School of Biological Sciences added: "The immune system then over-reacts to defend the body against what it assumes are dangerous invaders. This leads to allergic symptoms."

In the case of Ms Khoo Siew Hong, who died after eating prawns despite her allergy to the shellfish , State Coroner Marvin Bay said on Monday (Aug 21) an injectable epinephrine device can reverse symptoms of a reaction by opening airways and stabilising blood pressure. 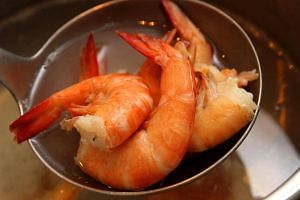 He added: "Susceptible persons may benefit carrying an epinephrine pen on their person for emergency use. Caregivers of young children or the elderly may consider affixing a medical bracelet or necklace containing allergy information to persons under their carè."

The Health Hub website said common allergenic foods include eggs, soybeans, peanuts and fish. Symptoms of food allergy include swelling of the lips, face, tongue, throat or other parts of the body, flushing, itching of the eyes, hives or eczema and breathing difficulties.

Health Hub also said anaphylaxis - the cause of death for Ms Khoo - is a severe allergic reaction that can be fatal if left untreated. It may occur without usual symptoms of itchy rashes and swelling of eyes and lips.