SINGAPORE - On Damien Wai's first day in daycare, his mother teared up.

It was an important milestone for the three-year-old, but that's not the only reason.

Unlike other children, Damien suffers from leukaemia.

"He hasn't been with other children for a long time because he was in hospital for nine months. The older boys just took his hand and they started running around the centre, and he was really carefree," his mother, Ms Rebecca Sit, 37, recalled.

Damien was diagnosed just before he turned two. With his low immunity count, social activities are limited, and face masks are his daily accessory.

But at Arc Children's Centre, which caters to children aged three to 16 with cancer and other life-threatening illnesses, Damien can play freely in a controlled environment.

The children learn to bake, do Zumba, and even set up their own eco-garden. Fridays are saved for special events like magic shows and birthday celebrations.

The centre, which moved to its new 5,000 sq ft premises at 77 Lorong Limau in July, also has its own slide and climbing wall.

For co-founders Geraldine Lee, 62, and Ronita Paul, 67, maintaining the centre's cleanliness and hygiene is their top priority. 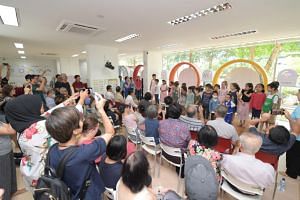 Anyone who enters the premises are required to wash their hands. Low-bacteria meals are specially prepared for the children.

The centre also takes in siblings, who are often neglected when the cancer-stricken child undergoes treatment.

Ms Paul says, "They go through a lot of emotional upheaval. So when we bring them in, we treat them as equal, and try and teach them that they must help their parents look after their older brother or sister."

Despite their young age, the children display a level of maturity well beyond their years, says Ms Lee. For instance, Damien knows he cannot eat outside food, and he will promptly reject it when offered.

Apart from seeing Damien's growth, Ms Sit is also grateful for the emotional support she has received from other parents who are caregivers.

"It's nice that we all speak the same language. We have a WhatsApp group to send pictures, so the parents can keep track of what their kids are doing."

Ms Paul adds: "When you have a bad day, you think about your problems. And yet when we're going home, we remind each other that our problems are not even half as bad as what the kids have gone through."