When she first started offering free haircuts to old folk in Chinatown, barber Poh Chu Yin was rejected by everyone she approached.

It was unlike her experience in Malaysia with her barbering mentor, said Ms Poh, 27, where everyone they met on the streets would agree readily to a free trim.

"Here, if you ask someone, 'Uncle you want a haircut?', they will look at you funny, and ask 'Who are you?'. It felt a little hostile," she recalled.

The self-professed YouTube junkie had come across the idea of giving haircuts to the needy or disadvantaged after watching YouTube videos of similar efforts by barbers overseas.

"It sparked the thought that giving handouts is not enough, it's touch and go and the engagement is low," said Ms Poh.

"I realised barbering was a great idea; a great way to restore their dignity on the streets, and I was super excited to do something like that."

But, as she soon found out, her good intentions were, more often than not, rebuffed. 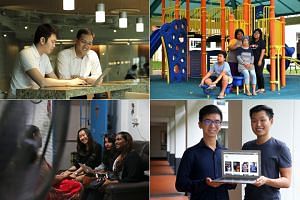 Capturing the hearts of children in the heartland

Undaunted, she decided to find out more about the needs of the community by volunteering with charity organisations such as New Hope Community Services.

It was through this that she realised she could help a different group - lonely residents living in low-income rental flats who were in need of company.

For a year, she has been going to the rental flats in Jalan Kukoh, in Tiong Bahru, every weekend, to offer haircuts to residents.

She goes with a group of friends, who may bring pastries to share, or just go along to hang out there.

"Most of the people we approach, especially the old folk, they really want the conversation. Barbering is just a tool that we use to engage them," said Ms Poh, who runs her own barbershop, Telja Studios, in Chinatown.

A friend and fellow volunteer Abraham Yeo, 37, said it has proven to be a handy way to spend quality time with residents.

"She's (Ms Poh) always shown a very genuine interest in asking them about their lives in a non-interrogative way," said Mr Yeo, a software engineer.

Ms Poh, who chats with her customers in Mandarin and English, emphasised that it was never about the haircuts.

"It's about building relationships with the residents; some of them are single, or they've lost their spouse and now live on their own, so we try to be that daughter or son to them, and just love them," she said.

"Most times they appreciate it."

A version of this article appeared in the print edition of The Straits Times on December 22, 2018, with the headline 'Cut out to help those in need'. Subscribe
Topics:
More
Whatsapp Linkedin FB Messenger Telegram Reddit WeChat Pinterest Print Purchase Article Copy permalink