A new annuity plan that will give Central Provident Fund (CPF) members increasing payouts each year is not likely to find favour with the majority of retirees, said MPs and academics yesterday.

The reason: The initial payouts from age 65 will be about 20 per cent lower than those of the default plan offered by the CPF Board.

Two groups, in particular, will find the new CPF Life plan unattractive. These are the active seniors who want more cash in hand for their social activities, and those who have less non-CPF savings. 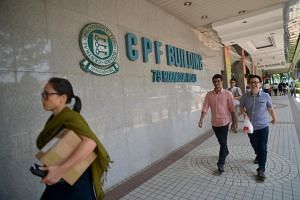 MP Foo Mee Har, chief executive of the Wealth Management Institute, questioned the attractiveness of a plan that requires a "pay cut" when compared with the CPF Life Standard Plan, which gives a fixed payout every month. "It's quite a big sacrifice because, at that age, you're probably still active and want to do more, like travel," she said.

The plan, announced yesterday by the CPF Advisory Panel and accepted by the Government, will give "escalating payouts" of 2 per cent a year to keep pace with the rising cost of living.

MP Liang Eng Hwa, who chairs the Government Parliamentary Committee for Finance and Trade and Industry, felt that the lower income who have little personal savings or family support would need bigger payouts from the start to cope with daily expenses.

Their sentiments have been anticipated by the advisory panel, which said it is likely that a minority would take up the new plan when it is ready in a few years' time.

Still, it is useful for those who want payouts to keep pace with inflation but are unwilling or do not know how to set aside sufficient funds, said SIM University economist Walter Theseira.

Subsidies could be given to bring the initial payouts up to the starting level of the standard plan but such a move would ultimately be borne by the taxpayer, he added.

The other change from the advisory panel is for a low-cost private investment scheme for investors with an appetite for risk but little time or know-how to delve into it.

This new Lifetime Retirement Investment Scheme (LRIS) was welcomed by academics and industry experts because it is an alternative to leaving one's savings in the risk-free Ordinary and Special CPF accounts and investing them under the current higher-risk CPF Investment Scheme.

It is an attractive option, especially for younger investors who can bear more risks, said Mr Marcus Kok of PwC Singapore.

But the LRIS is "not fail-safe" and the investor must be prepared to shoulder some risk, said Nanyang Technological University economics head Euston Quah.

Economist Chia Ngee Choon of the National University of Singapore called for investors to be given clear and simple information on the LRIS investment strategies and the investment record of the fund administrator, which has yet to be picked.

Labour MP Zainal Sapari suggested that future reviews should look at ways to encourage members to top up the accounts of their non-working spouses. Plans at a glance
How CPF Investment Scheme stacks up