SINGAPORE - A woman who kept the ill-gotten gains of a love scammer was duped into giving away most of the money to a different online Casanova.

Christina Cheong Yoke Lin, a part-time English teacher, had allowed a love scammer to use her bank account to retain the $50,030 his victim had transferred over.

For dishonestly misappropriating the money, the 63-year-old was on Thursday (Aug 22) sentenced to an 18-month mandatory treatment order, which involves treatment for her mental condition in lieu of jail time.

Cheong had been found to be suffering from a major depressive disorder when she committed the offence.

The court heard that Cheong, who pleaded guilty in May, met a man known only as Collins through online dating platform Badoo in early August 2017.

When she told him that she was in debt, he asked if she would allow his boss' associates to make use of her bank accounts.

The court heard that Collins had explained that she could take $500 out of each transaction but she was to take the rest of the money to Johor Baru.

Cheong expressed concerns. She was worried that she would get into trouble for carrying the money into Malaysia, and also wondered why the money could not be paid directly into the bank account of Collins' boss.

However, she agreed to give the arrangement a try. 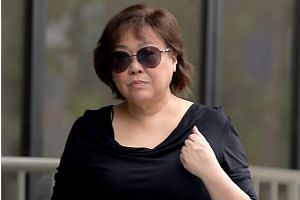 Instead she decided to keep the money.

But love came calling and on Aug 21, 2017, Cheong transferred $31,000 to a Malaysian bank account to help another man she was smitten with.

However, the man, known only as Mark Anthony, was also a scammer. He had convinced Cheong that he needed the money because he was purportedly detained by the Malaysian authorities.

Cheong was caught after the Singaporean woman linked to Collins' love scam alerted the police on Sept 22 that year.

It is unclear what happened to the online Casanovas but Cheong has since made full restitution.

Deputy Public Prosecutor Leong Wing Tuck told the court that the prosecution will be filing an appeal against the sentence.

For dishonestly misappropriating the money, she could have been jailed for up to two years and fined.