A bloody mess greeted part-time cleaner Winnie Teo outside her three-room flat in Block 114, Yishun Ring Road, when she returned from work at about 11pm on Saturday.

Pools of blood were seen at the entrance of the unit that she shared with her 76-year-old husband, retiree William Wong, and their 34-year-old female tenant from Malaysia.

The walls of the corridor were also speckled with blood. 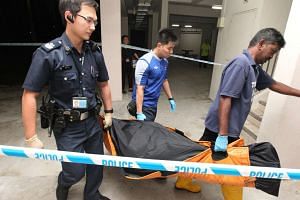 Man, 76, found dead after tussle with woman tenant in Yishun

She had rushed home after a four-hour shift at a food court in Orchard Road after being told that her husband was bleeding.

There was an alleged fight between Mr Wong and their tenant outside their home.

Injured and bleeding, Mr Wong had apparently run into his flat, where he was eventually found dead.

The tenant was near the scene when the police arrived and was arrested. The woman had previously worked as a dishwasher for Madam Teo's boss, but switched jobs a few months ago, Madam Teo said.

"I didn't know what she did, but she would leave the house at about 10am and come back at around 11pm every day," said Madam Teo.

She said her tenant would dress simply in T-shirt and jeans, and would argue frequently with Mr Wong. "A couple of times, she threatened to burn the flat down," said Madam Teo.

She said the tenant frequently defaulted on her monthly rent of $250, which was meant to pay for Mr Wong's expenses.

"Sometimes she wouldn't pay, but I never rushed her," Madam Teo said, adding that she would give Mr Wong money instead.

Earlier on Saturday, Mr Wong had dinner with his wife at her workplace as part of their routine. It was also the last time that Madam Teo saw him alive.

He had offered to wait there till her shift ended, but she said there was no need for that and gave him $10 before he left.

"I should have let him stay," Madam Teo said.

She claimed that two weeks ago, a woman visited her flat and said the tenant owed her $50.

"She had a photocopy of her passport. I lied that my tenant had moved out in order to protect her," Madam Teo said.

Mr Wong had a son and a daughter from a previous marriage.

They accompanied Madam Teo, who is childless, to the mortuary yesterday morning.

"He had another son who died in a traffic accident at the age of 15 more than 30 years ago," Madam Teo added.

"My husband thought of his dead son every day."

Madam Teo, who has no relatives, said of her loss: "My only companion has been taken away from me.

A version of this article appeared in the print edition of The Straits Times on November 23, 2015, with the headline ''My only companion has been taken away from me''. Subscribe
Topics:
More
Whatsapp Linkedin FB Messenger Telegram Reddit WeChat Pinterest Print Purchase Article Copy permalink