SINGAPORE (THE NEW PAPER) - After paying several hundred dollars for what they thought were category one JJ Lin concert tickets, all they got were blank pieces of paper or empty envelopes.

Based on the number of cases The New Paper has been made aware of, a scammer has allegedly cheated victims of at least $2,000.

The seller, believed to be a woman, told victims she was selling her tickets to the sold-out concert at the Singapore Indoor Stadium on Aug 19 as she had broken up with her boyfriend.

She claimed she could not bring herself to attend the concert without him and was going to Taiwan for a break.

An alleged victim, Ms C, a Facebook user who declined to be identified, lost $300 to the scammer. She told TNP she was approached on Facebook by a girl who agreed to sell the tickets at a lower price.

The original price for a pair of category one tickets would have been $696 before any administration charges, according to the SportsHub ticketing website. SportsHub is the official ticket seller for the concert.

The girl had apparently seen that Ms C was looking for tickets on the concert's event page and offered to sell the two tickets to her at $600.

Ms C told TNP the alleged scammer requested to send the tickets via registered mail as she did not feel comfortable meeting up. She said: "We agreed I would pay half first when she provided me the tracking number, then the other half after I received the tickets."

After waiting several days, she discovered that the tracking number didn't exist.

When Ms C contacted the seller on Facebook messenger, she claimed the tickets were being held by the post office. 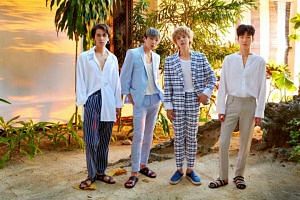 JJ Lin to perform in Singapore on Aug 18 and 19

Ms C said the alleged scammer suggested meeting her after collecting the tickets from the post office.

She added: "Since then, I haven't heard from her."

Another victim, who wanted to be known only as Ms Tan, said she paid a total of $400 for the same tickets, but received an envelope with a foolscap paper in it.

The alleged scammer claimed it was not her, but her brother who was using her phone to scam people.

She then offered to transfer Ms Tan's money back to her. But after several days and many excuses, the money did not arrive. Ms Tan, 26, has lodged a police report.

Another member of the public, who wanted to be known only as Ms Christine, told TNP that she had agreed to pay $700 for the pair of JJ Lin tickets.

But she decided at the last minute that it would be safer to transfer the money only after she had received and checked the tickets.

Ms Christine, who is in her 30s, received an envelope with a blank sheet of paper on July 30. She told TNP that after she had described her experience on Facebook, at least seven others told her of their similar experiences.

She said she had made a police report, and knew of others who had done the same. The police confirmed they had received her report.

On Aug 3, the police released an advisory warning members of the public about concert ticket scams.

It said that last year the police received at least 120 reports of online purchase scams specifically involving the sale of concert tickets. They discouraged buyers from making payments or deposits in advance.