This means that they will no longer be able to sell tobacco products, the HSA said in a statement.

Retail outlet Fair Inn Food Place, which was a repeat offender, was found selling cigarettes to an underage person for the second time. Its licence was revoked on Nov 2 last year.

The outlet, located at 806 Woodlands Street 81, first had its licence suspended for six months in January 2016.

The second retailer, Excellence Supermarket located at 131 Lorong 1 Toa Payoh, had its licence revoked on Dec 19 last year for selling cigarettes to an underage person in school uniform.

The HSA also suspended the retail licences of four outlets after the operators were caught selling to underage customers. It was their first such offence.

With the suspension, these outlets will not be able to sell tobacco products for six months. 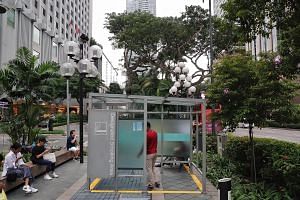 Legal age for smoking around the world

In the statement, the HSA said that it would not hesitate to take action against errant retailers.

"Tobacco retail licensees are reminded that they are responsible for all transactions of tobacco products taking place at their outlets, as well as the actions of their employees," the HSA said.

"Sellers take the risk of contravening the laws if they assess age by mere physical appearance of the buyer."

Tobacco retail licensees were also reminded to educate their employees on the law on the sale of tobacco products.

Sellers should verify the age of those who wish to buy tobacco products by calculating the date of birth.

The minimum legal age to use, possess or buy tobacco products was raised to 19 years with effect from Jan 1. It will be raised to 20 years from next year and 21 years from 2021.

Anyone caught selling tobacco products to those below the minimum legal age may face a fine of up to $5,000 for the first offence and up to $10,000 for the second or subsequent offence.

In addition, their tobacco retail licences will be suspended for six months for the first offence and revoked for the second offence.

Outlets found selling tobacco products to underage people in school uniform or those below 12 years of age will have their licence revoked even for the first offence.

The HSA said that from 2015 to last year, 83 tobacco retail licences were suspended and 13 were revoked.

Those found guilty of selling tobacco to a person under the minimum legal age will not be eligible to apply for a tobacco retail licence.

In the statement, the HSA also reminded the public that they should not supply tobacco products to underage people.

Anyone caught buying or acquiring any tobacco product for an underage person may face a fine of up to $2,500 for the first offence and up to $5,000 for the second or subsequent offence.

In addition, anyone caught giving any tobacco product to a person below the minimum legal age may face a fine of up to $500 for the first offence. The maximum fine is $1,000 for the second or subsequent offence.

Since 2015, 18 people have been caught for these offences.

The HSA said that those who have information on the illegal sale or supply of tobacco products to underage people can call the Tobacco Regulation Branch on 6684-2036 or 6684-2037 during office hours.