Two 58-year-old Singaporean men were taken to court yesterday after they allegedly placed toy grenades in public places with the intention of duping others into believing that the devices would explode.

Ho Hee Hew and Elankovan Marimuthu were each charged with one count of an offence under the United Nations Act.

Court documents did not state if the two men were in cahoots with each other.

Ho is accused of placing a brown bag with an attached toy grenade at Exit A of Clarke Quay MRT station at around 4.30pm on Sept 16 last year.

In a statement on Tuesday, police said officers were alerted to the case about 30 minutes later.

"Through ground enquiries, officers from Central Police Division and Public Transport Security Command established the identity of the man who is believed to have intentionally left the bag at the station," it added.

Officers arrested Ho the next day. 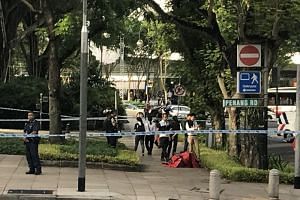 Separately, Elankovan allegedly placed a toy grenade next to a fire hydrant at the Istana Park on Nov 3 last year.

The New Paper earlier reported that the police later cordoned off a section of the park at the junction of Penang Road and Penang Lane, near Dhoby Ghaut MRT station.

Police also stated on their Facebook page then that Penang Lane was closed to traffic to facilitate operations.

TNP reported that at least six police vans were spotted at the scene.

It was also understood that members from the K-9 unit and the Singapore Armed Force's Chemical, Biological, Radiological and Explosives Defence Group were deployed there as well.

The toy grenade was removed at around 5.20pm that day and Penang Lane was reopened to traffic.

The two men were each offered bail of $5,000 yesterday.

Elankovan will be back in court on Nov 7, while Ho's pre-trial conference will be held eight days later.