SINGAPORE - The Real Singapore (TRS) website co-founder Yang Kaiheng admitted in court on Thursday (April 7) afternoon that he lied about meeting wife Ai Takagi during GE2011. He made the admission after Deputy Public Prosecutor (DPP) G Kannan said he had a set of WhatsApp messages that the DPP said were of a "very embarrassing and personal nature".

Yang, 27, had said earlier that he had set up a Facebook page that criticised PAP MP Tin Pei Ling shortly after the May 2011 General Election with Takagi, but it turned out that he only met Takagi around September 2011, which is four months after the general election.

Earlier on Thursday, Yang Kaiheng said he only referred to the socio-political website as his in chats with his friends because he was proud of having a hand in setting it up with Takagi.

But that was the extent of his involvement, the court heard on Thursday morning. Yang denied writing, editing and uploading any articles that form the basis of his seven charges of sedition. 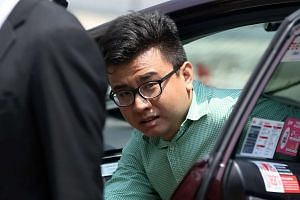 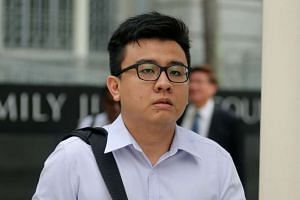 Yang 'ran TRS website for at least a year after launch'

Takagi had earlier pleaded guilty and was sentenced to 10 months' jail. The 23-year-old, who is 10 weeks pregnant, appeared with her husband in the State Courts on Thursday.

"I took pride in setting up the website... I didn't see a need to dissociate myself from it back then," he said.

As for his application to enter a start-up competition in Jan 2013 which stated that he handled marketing for TRS, he said he did so to "upsell his portfolio" and attract more seed-funding.

He also created accounts on freelancing platforms but gave Takagi rein over them. Developers who addressed Takagi as 'Yang' probably did so because such accounts stated the user's name as "K. Yang", he said.

In reality, Takagi ran TRS, and he did not have access to the website's control panel, or web-hosting and advertising accounts, he said.

It was also only Takagi who took out a public apology to Singapore Press Holdings for infringing the copyright of 244 articles earlier this year.

As he was not a developer, moderator or editor of TRS, "I did not need to apologise", Yang said.

The court also heard that he became a director of Ryuken - the company to which significant advertising revenue from TRS was paid - to help Takagi avoid being hit by high taxes.

An accountant had advised Takagi to set up a company to pay a flat tax rate of 30 per cent, instead of 40 per cent for personal taxes. Joining her as a director would also allow each of them to enjoy $30,000 of tax-free exemption, he added.

He also told the court that he had considered writing for TRS.

"But my English standard is not good enough to write," he said, adding that he failed his General Paper twice and frequently makes grammatical errors.

The prosecution also began their cross-examination of Yang.

The trial is expected to continue on Friday (April 8).